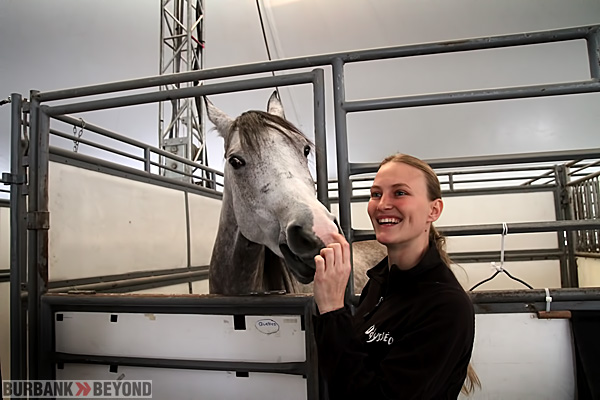 Growing up in a small town in Alberta, I was no stranger to wildlife. I spent weekends with friends on their farms, afternoons fishing for minnows in the creek and summers at camp learning archery and canoeing. My family had a lakefront cabin in Northern Saskatchewan where we were more likely to see deer and ducks than people. Until I took a tour through the Cavalia stables in Burbank, however, I’d never seen anything quite as majestic as their horses.

Cavalia is a performance art show created by one of the founders of Cirque du Soleil. The newest production, Odysseo, combines equestrian arts, acrobatics and theatrical effects to portray the bond that is developed between humans and horses in an experience unlike any other. The 67 horses and 45 artists spend overwhelming amounts of time together in order to develop a relationship and language all their own that allows them to create the art that thousands have experienced around the world.

It was apparent from the moment that I walked into the stables that these horses were more than just performance-animals, but rather were members of an exclusive, close-knit family. The groomers washed and braided the horses’ tails and manes with extreme care; the riders showed more affection for their horses than some people show their significant other. And that affection was reciprocated. One horse, Bravas, an Arabian born in the US in 2006, spent a solid 15 minutes nuzzling his rider, Elise Verdoncq. Even without having seen the show, it would be obvious to any passerby that these two were a close pair.

When speaking with Elise, it was apparent that the horses that she works with are extremely important to her. Riding since childhood, Verdoncq, born and raised in France, snapped up the opportunity to join the Cavalia team when the original show was still touring, almost four years ago.  She has been on the road almost consistently since then with her horses.

When asked about the training routine that she and the horses go through, Verdoncq was quick to explain that the most important aspect was for everyone to have fun. “We have to keep them interested so we allow them to train how they want to,” she said. She continued to explain that the horses know what they need to do, so training is largely just an opportunity for them to play. It’s clear that the horses are in charge – if one isn’t up for performing, that’s okay; there’s an understudy for that. If one doesn’t feel like training, well, “that’s life,” says Verdoncq.  One thing is certain though; with the freedom the horses have and the trust they have in their riders, every show experience will be unique to that night.

After my chat with Verdoncq, I was fortunate enough to catch up with Vice Mayor of Burbank, Emily Gabel-Luddy, who was also enjoying a behind-the-scenes tour of the Cavalia stables. Gabel-Luddy is no stranger to horses; she currently owns a retired show horse and was once a western rider herself.  She’s looking forward to the impact that Cavalia’s Odysseo will have on Burbank’s local economy. She explains that the show will increase visibility of the city, attracting tourists and bolstering sales in the community. However, she’s also very excited for the show itself. “It’s a magical show,” she says. “The horses almost seem human the way they respond to the riders.”

One thing is certain about Cavalia’s Odysseo; no where else will you see the level of trust and devotion between humans and horses than at this show, and because of this, you’re sure to have an experience that won’t soon be forgotten.