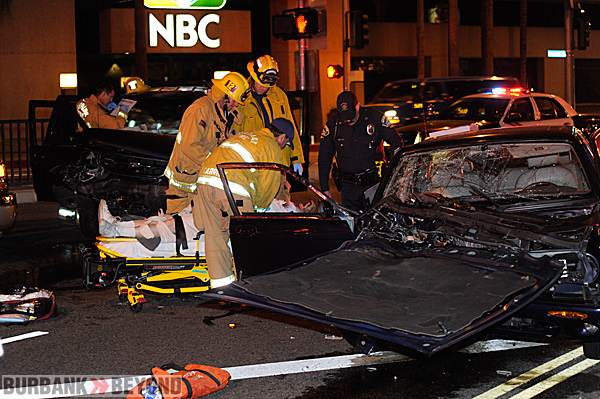 A suspected drunk driver injured three people when she ran a red light Wednesday evening in front of the NBC Studios at Alameda and Olive Avenues.

Burbank Police and Fire Department personnel responded to the accident at 8:07 p.m.  Initial reports were that someone was trapped in one of the vehicles.  A fire truck company and an additional rescue ambulance were dispatched to assist at the scene.

According to police, the victims were heading westbound on Alameda Ave. in a 2001 green Ford Explorer, when the suspected drunk driver in a blue 1999 Jaguar going eastbound on Olive Ave., ran a red light. The 57 year-old driver of the Explorer saw the other car coming at him, but was unable to avoid the collision.  The Jaguar struck the Explorer nearly head-on.

The driver, from Venice, complained of pain to his left wrist, and would seek his own medical treatment.  One of his passengers, a 79 year-old woman, received lacerations to her mouth, and complained of chest pain.  She was transported to Providence St. Joseph Medical Center. A 66 year-old man riding in the back seat of the Explorer received lacerations to his right eye area and upper lip, and spinal injuries to his neck.  He was transported to Los Angeles County-USC Medical Center.

The driver of the Jaguar, Maritza Luciano, 40, of Burbank, received three broken ribs in the accident.  After being treated at the hospital, she was arrested for felony drunk driving, and is being held on $100,000 bail.

How to Prevent a Christmas Tree Fire