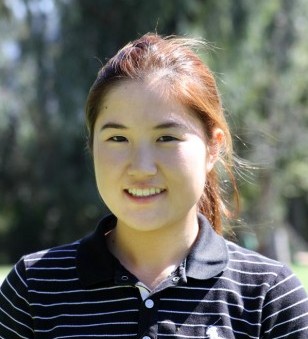 President Theodore Roosevelt once said, “Speak softly and carry a big stick; you will go far.”

Burbank’s Irene Maemura could very well be the quintessential example of that infamous phrase. The standout golfer, quiet as a church mouse on the golf course but as determined as a hungry lion hunting down its prey, began her senior year this week with high aspirations.

Maemura has had an excellent career thus far for the Burbank High girls’ golf team but capturing the Pacific League individual title this fall would cap off an amazing journey.

“It would mean a lot,” Maemura said. “It’s something that I could look back at and be really proud of. It would be a great memory.”

It wasn’t too long ago that Maemura did not play golf. She began playing the sport in the seventh grade when family and friends took her out on a local golf course. Maemura has improved exponentially in a short amount of time.

“I’m amazed by all of it,” Burbank coach Branko Sevic said. “For playing since seventh grade, she has excelled so fast it’s unbelievable.”

Now six years later, Maemura embarks upon the opportunity of a lifetime as she attempts to etch her name alongside some of Burbank High’s greatest women golfers such as Grace Woo and Moah Chang.

“She definitely is in the top three ever at Burbank,” Sevic said. “I think she has a chance to be Pacific League champion, get to CIF Finals and qualify for State this year. I truly do. I think this can be her year that she has worked so hard toward.”

Maemura, 16, trains every day in her pursuit to be the best she can be. She can be found at either Angelus National Golf Club, Hansen Dam or at the Moorpark Country Club fine-tuning her swing at the golf range or mastering her putting and chipping. Maemura meets with her swing coach, Brad Sherfy, once a week as well as with a personal trainer to strengthen her core.

Her love for golf is as much mental as it is physical.

“It’s more of a getaway for me after a hard day of school,” Maemura said. “It really relieves my stress. It’s a great sport. It gives me a lot of benefits like college offers and meeting new friends.”

Playing division-one golf on the collegiate level is one of Maemura’s goals though education takes priority. She currently maintains a 3.8 GPA at BHS and has interest in attending medical school after college and entering the medical field as a future career.

“It would be awesome to play in college,” she said. “But I know it will be tough playing golf and getting my education.”

Sevic believes that college golf is a strong possibility for Maemura.

“She can play at division one easily. She hits the ball as well as anyone,” he said. “It’s basically up to her. How badly does she want it?”

Maemura, a 4-handicap and a member of the SCPGA, spent this past summer competing in national tournaments as part of the American Junior Golf Association. She finished in the top 15 in tournaments held in Palm Desert, Calif., Indiana and Wisconsin. Maemura also played in the Callaway Junior World Golf Championships in San Diego.

Her ability to stay calm under pressure and not be deterred by a poor shot has enabled Maemura to be successful in major events. The past two years has seen Maemura advance to the CIF Southern Section individual finals.

“She never gets mad. She is even tempered,” Sevic said. “She internalizes it and it’s a great way to do it.”

The sky is the limit for her. Not since Burroughs’ Emily Tubert has the city seen a talented golfer as the mild-mannered but dynamic Maemura.

“You can just see the confidence she has in her game,” Sevic said. “It’s scary and amazing how good she really is.”