As the pressure mounted for the Burroughs High girls’ volleyball team to remain undefeated in Pacific League play, every challenge was met, including Tuesday’s 25-14, 25-20, 25-12 defeat of rival Burbank in the regular-season finale.

Typical of sweeps, the middle game was paramount, and it was for the host Indians, who are ranked No. 7 in the CIF Southern Section Division II-A.

The playoffs begin next Tuesday and the pairings will be announced on Friday. The Indians should have a home match at 7 p.m., while Burbank, which finished fourth in league, will likely have a road match.

After falling behind 3-0 in the second game, Burroughs (21-7 and 14-0 in league) tied it at 4-4 when Burbank sophomore middle hitter Bene Snyder hit out of bounds.

“We had a rough beginning,” Burroughs coach Edwin Real said. “There’s always a challenge playing your rival. But I’m proud that we went 14-0 in league.” 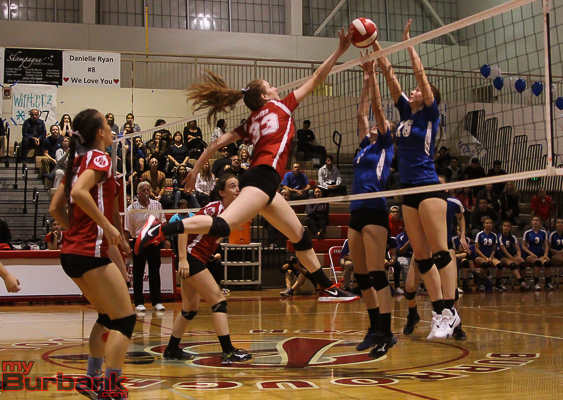 JB middle blocker Caleigh Paster (#33) goes for a winner in sweep of Burbank. (Photo by © Ross A. Benson)

From there, the Indians led 11-8 on senior opposite hitter Jessica Rury’s kill. It became 14-10 on sophomore middle blocker Marin Grote’s smash.

“As a team, there was no added pressure to win this game,” said Grote, who finished with a match-best 10 kills. “We play as a team.”

Grote also spoke about the upcoming playoffs and feels confident about her team’s chances. “I think that we can win a championship if we play as a team.”

When junior middle blocker Caleigh Paster (eight kills) tossed in a winner it gave the Indians a 15-11 advantage, and Grote’s blast made it 16-11.

The Bulldogs made up some ground and came within 16-13 on a kill from senior outside hitter Cailey Stevenson.

But the Indians went on a 5-1 spurt that included three kills from Grote, and one from senior defensive specialist Samantha Sullivan.

A combined stuff from Burbank junior middle blocker Nicole Winters and junior outside hitter Hailey Heath cut the lead to 21-15, while a service ace from senior opposite hitter Marina Manokian made it 21-16 as Burroughs called time out. 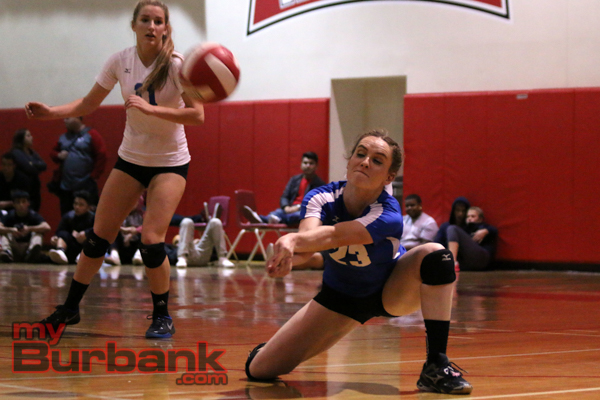 “It’s hard to come back after losing the first two games,” said Heath, who had a team-best six kills. “We’re a really young team after graduating eight seniors. We tried to build on the energy in the second game, but we couldn’t. We put pressure on the offense to score and finish the ball.”

Heath went on: “We know Burroughs was undefeated [in league] and maybe we were thinking about that. They’re good and we know that. But we just didn’t play well.”

Burroughs went on a 7-1 blitz that was capped with an ace from sophomore setter Lauren Zedlar as the Bulldogs asked for a time out.

Another spurt followed, this time 6-0 that saw senior outside hitter Danielle Ryan (five kills) and Paster team on a block, Paster’s kill, Ryan’s winner, Zedlar’s ace, Paster’s kill and Winters’ smash that went out of bounds. 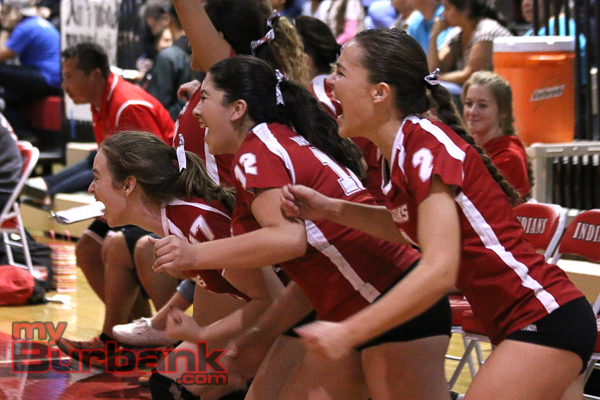 Good teams rally and Burbank did as it came within 20-12 on a kill from Heath, but the Indians gained control and tallied the final five points as Paster added a kill, Rury and sophomore outside hitter Julianna Cottrell combining on a block, Cottrell’s kill and Grote’s blast for the game.

“We really shot ourselves in the foot,” Burbank coach Karl Rojo said. “We had so many unforced errors. We touched the net and hit out and our passing wasn’t very good.”

In the final game, the Indians raced to a 7-0 lead on points from Grote, senior defensive specialist Katheryn Dominguez’s ace, Rury’s block, Cottrell’s stuff, and Cottrell’s and Rury’s combined stuff. 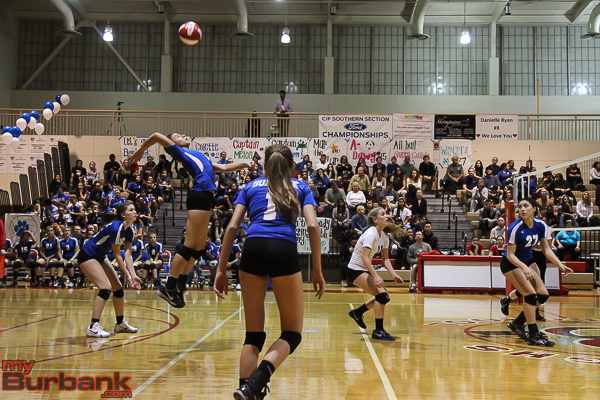 Burbank is set to attack in loss to Burroughs. Photo by © Ross A. Benson)

Burroughs and Burbank spilt eight points as it became 11-4, before the Indians moved in front 14-7 on a slam from Paster.

What followed was a 7-0 run that made it 21-7 and included a kill from Ryan, sophomore setter Mia Staub’s ace, Rury’s dagger, along with Paster’s and Ryan’s combined jam.

Burbank fought back and came within 22-11 on Heath’s winner, but it was a bit late as the Indians took three of the final four points including Grote’s smash for the stanza.