Starting from the opening stanza, the Indians controlled the tempo with crisp passing, solid defense and well-placed shots that Pasadena had difficulty defending.

“We did a real good job of serving today,” Burroughs coach Edwin Real said. “Danielle did a good job, especially in the first game and the third game.” 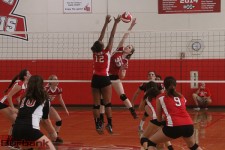 The Bulldogs (1-2 and 0-1 in league) came within 18-12, before Burroughs went on a five-point blitz to make it 23-12 on Ryan’s kill, junior opposite hitter Sophia Rizzotti’s winner, and senior defensive specialist Zoe Baer’s three straight service aces.

Pasadena came within 23-17 on Artemesia Meier’s block, but Burroughs scored the final two points on winners from Grote.

“Marin is one of our “go-to” hitters,” Real said, “and so is Danielle. They’re both high-percentage hitters. Our setters did a real good job of getting them in position to score.”

From that point forward, it was all Burroughs (1-3 and 1-0 in league), which tallied the next dozen points. Some of the highlights included two winners and a block from Rizzotti, two kills from Ryan, two winners from Paster, and sophomore setter Lauren Zedlar’s ace. 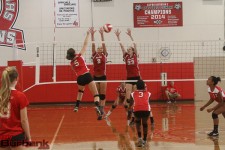 Pasadena’s Sophia Courtney (#5) tries for a point. (Photo by © Ross A. Benson)

The Indians took four of the next six points as Ryan delivered a kill to make it 22-10. Grote’s winner gave Burroughs a 23-11 lead, and an ace from senior defensive specialist Katheryn Dominguez made it 24-11. Sophomore outside hitter Julianna Cottrell’s rocket gave the Indians the game.

A similar pattern held for the middle game as it was tied at 1-1 and 3-3, but Burroughs’ dominance became evident as the Indians went on a seven-point spurt to move in front 10-3 with Grote contributing four kills, Cottrell one winner, sophomore setter Payton Jensen one kill, and senior opposite hitter Jessica Rury one smash.

Pasadena rallied and pulled within 24-13 on Sophia Courtney’s service ace, but the Indians scored the final point on a kill from Grote.