Our Town is an absolute triumph. Burroughs High School’s production of Thornton Wilder’s Pulitzer Prize-winning play would do a major college proud.

All three acts of the play take place in the small town of Grover’s Corners, New Hampshire.  Most commentators see Our Town as bringing out the inherent drama in “ordinary” lives: the cycle of birth, maturation, marriage and death. 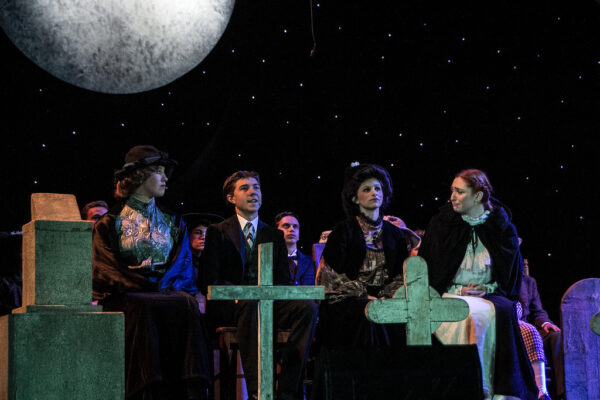 By design, the stage scenery for Our Town is sparse compared to that of most plays with a large cast, which is one reason why it is popular choice for budget-conscious high schools. But in the Burroughs production, less is definitely more.  The actors are able to move freely about and convey the sense of a vibrant small town, against impressive backdrops of buttermilk skies and full moon nights.

The sound effects are stunning and the lighting is spot on. The technical elements enlarged the stage to a wide-screen panorama without calling attention to themselves, a professional level of sophistication. 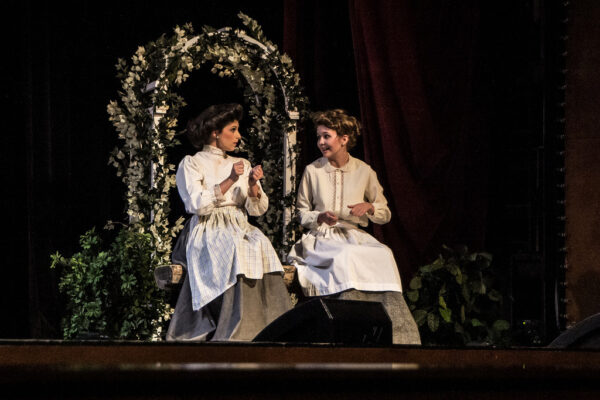 And the biggest achievement of all was the acting. Everyone was strong. Those who had to play characters considerably older than themselves pulled it off. And the most impressive performances came from those playing the two most crucial roles: Cassidy Boland playing Emily Webb and Nick Apostolina playing the Stage Manager. Cassidy gave a compelling performance throughout the play, and she was absolutely heartbreaking in Act III. Nick convinced us that he really was the much older and wiser Stage Manager, conveying both quiet assurance and wry humor.

The Stage Manager is commonly seen as Wilder’s attempt to frankly confront the artificiality of the theatrical stage. But I see that the Stage Manager as someone who confronts a highly artificial view of human history, one that makes the high and mighty the stars and everyone else, merely extras. 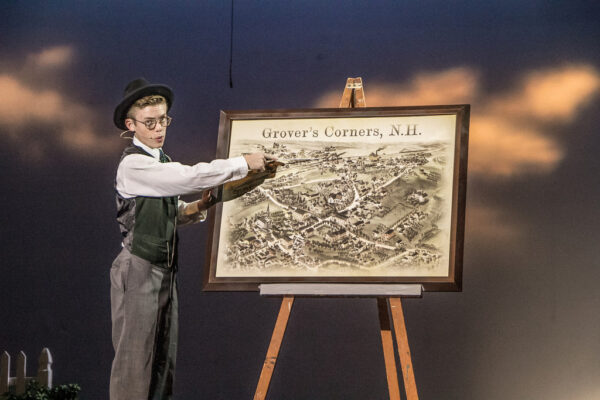 “Our Town” performed by JBHS Drama with Nick Apostolina as the Stage Manager. (Photo Courtesy of Kathy Flynn)

But that blinkered point of view is simply how the stage of human history is managed. Our Town’s Stage Manager places day-to-day community life in the heart of the human experience. When “the professor” lists the population of Grover’s Corners as 2640, the Stage Manager discreetly corrects her. It’s 2,642, owing to two recent births. Every life is counted. And Our Town poignantly shows that every moment counts, moments that can go unnoticed all too easily. Nick’s Stage Manager makes us feel that two young people discovering their love for each other is as significant as the discovery of a continent.

When Our Town debuted in 1938, common citizens were reshaping the social compact that the Great Depression had shattered. In four years, American composer Aaron Copland would write Fanfare for the Common Man, while hundreds of thousands of “common” men would fight against regimes that despised them for wanting nothing more than to live and love in peace. And decades later, in the 1960s and 1970s, historians would finally begin to study the experiences of “ordinary” people in the past, something they dubbed the “new social history.”  This perspective has proven to be an enduring one to be reckoned with. 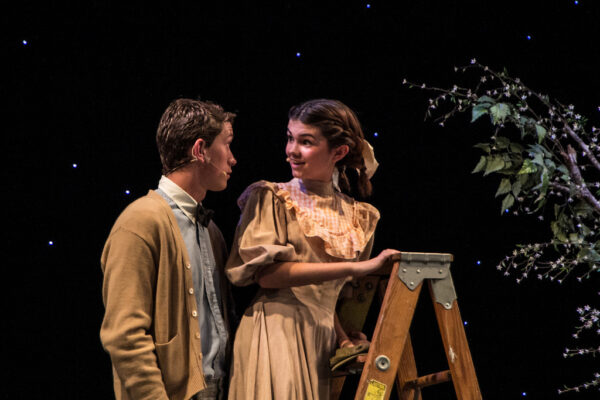 A superb performance of a great play can provide insights that would otherwise require years of hard experience. The Burroughs production of Our Town and Nick’s Stage Manager is drama that makes a difference.

For more information on JBHS Dramatic Association, visit their website. For more photos from the performance, visit Wicked Goddess Photography. Check out our previous article on the production with an in-depth look at some of the actors here. 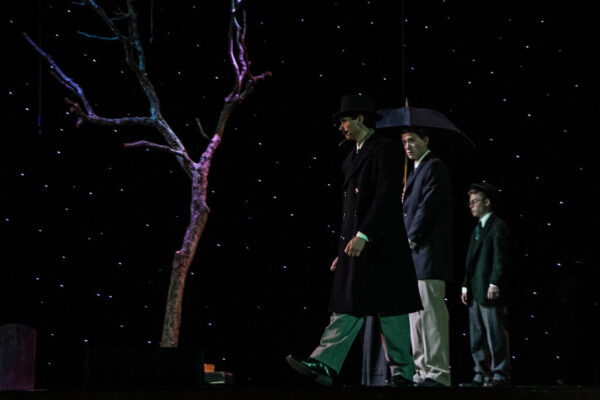