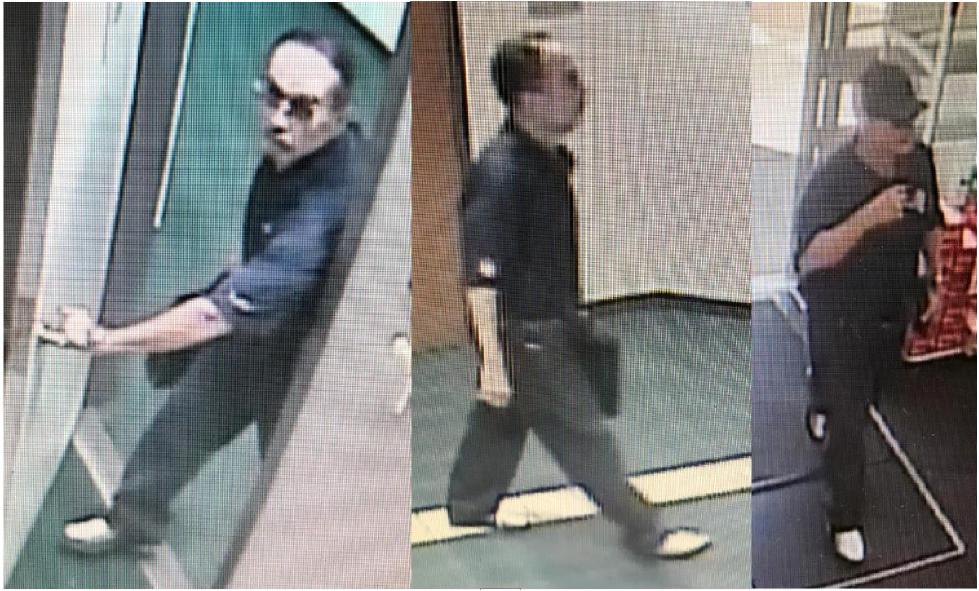 NOTE: The suspect named below struck three times in the City of Burbank, stealing wallets from three separate employees in medical offices at Providence Saint Joseph’s Medical Center. The Burbank thefts occurred on August 30, 2017 and August 31, 2017.

On Thursday, October 11th, 2017, Pasadena Police Detectives, along with a Glendale Police Detective and State Parole Agents arrested a man who is allegedly the “Office Creeper” in El Monte, CA. Parolee Anthony Fierro, a career criminal, was arrested in connection with a string of wallet and credit card thefts from office buildings throughout the San Gabriel Valley and Burbank.

The suspect in the surveillance photos was dubbed the “Office Creeper” due to the stealthy manner in which he crept through office hallways, stole wallets from women’s purses and later fraudulently used their credit cards, causing victims and retailers thousands of dollars in losses.

Detectives from Arcadia, Burbank, Glendale, and Pasadena Police Departments put out “Wanted” flyers for Fierro, who at the time was unidentified. A break in the case came when Glendale PD Detective Kelly Kramer received an anonymous tip identifying Fierro, after the tipster saw Glendale’s “Wanted Information” on the TV news.

After Fierro was identified as a parolee, Pasadena PD Detective Victor Cass took the lead in organizing the multi-agency arrest and search teams. Cass and Kramer, along with Detectives from Pasadena PD and State Parole agents, arrested Fierro at the Parole Office in El Monte, CA. They followed up the arrest with a parole search at Fierro’s residence, collecting crucial evidence related to their cases.

On Friday, October 13th, the Los Angeles County District Attorney’s Office filed 14 felony counts against Fierro, including Identity Theft, Grand Theft, and Commercial Burglary. In addition, the charges were enhanced due to Fierro’s nine prior violent felony convictions. Fierro is scheduled for arraignment on Friday. His bail was set at no bail.

Anyone with information about this case is encouraged to call Pasadena Police at (626)­744-4241 or you may report information anonymously by calling “Crime Stoppers” by dialing (800) 222-TIPS (8477), use your smartphone by downloading the “P3 Tips” Mobile APP on Google play or the Apple App Store or by using the website http://lacrimestoppers.org.