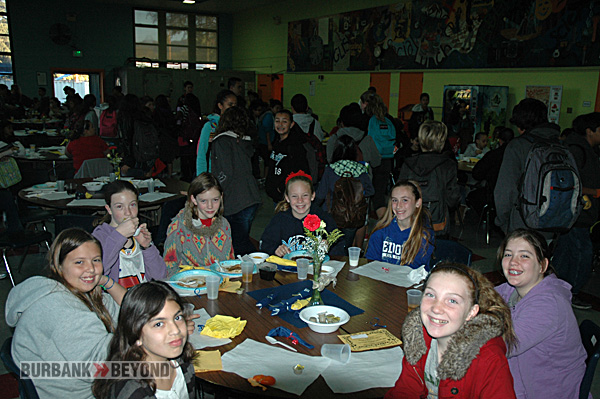 Straight-A student Rami Makarem, 11, had three words to say as his fork was poised over two pancakes on the paper plate Friday morning before class.

The event was the annual “A’s Breakfast” and every student who earned an A on their report card was treated to a pancake breakfast beginning at 6:45 a.m., said Principal Stacy Cashman.

Administrators, teachers, secretaries, instructional assistants and custodians all did their part to make the students feel special.

The estimate of pancakes served was 1,500, said culinary arts teacher Doreen Wydra, who stepped in to run the event for teacher Terri Kim who is on maternity leave.

Nathalie Celio, 12, a seventh-grader, earned four A’s on her report card in English, science, physical education and art, she said.

“The kids who got an A deserve the pancakes,” she said.

“It’s cool!” said Collin Johnson, 11. He received A’s in physical education and in his computer class. “You never see this at other schools.”

The students display a lot of pride during the breakfast, said custodian Gary Rapp, who attended Jordan in the 1970s.

“The kids absolutely love this breakfast and we love doing it for them!” he said. “They come in with their shoulders back. This is just a fantastic event.”

The A’s Breakfast tradition started about 30 years ago and was the brainchild of former guidance counselor Marv Cira, said Karla Buffington, physical science teacher. Funds for the breakfast are raised during the PITS (Parents Interested Teachers and Students) Talent Show, Cashman said.