The first part of the program included the Jordan Choir program’s classical set, featuring all choirs performing Christmas carols from Russia, Germany, France and elsewhere, traditional Jewish songs, a Swahili poem set to music and more. After intermission, the choirs donned costumes and performed their show sets, including the Madrigals’ medley of songs and dance from The Grinch. All choirs and music students gathered at the end of the concert for Carol of The Bells.

A special song and video tribute was made to Jordan’s retiring science teacher, Steve Saracino, who has for years overseen the sound for the choir concerts and annually performed the part of Santa Claus in the Jordan VMA’s Holiday Show. Saracino spoke to the audience of about 700 people for a few minutes, talking about his years at the school and thanking the parents of Jordan students for raising, in his words, “terrific kids.”

Judie Stroh accompanied the singing groups on piano throughout the first part of the program, along with Steve Pandis on upright bass. Other musicians accompanying some of the songs included Laurie Lyman on flute and several USC student teachers on percussion, violin, clarinet, recorder, piano and guitar.

“This is a fantastic choir program and these kids work so hard to put on great shows every year. Don’t you think they deserve a better auditorium?” Cashman asked the crowd. She explained that a Giving Tree will be placed in the auditorium foyer, with the names of donors on the leaves of the tree.

Generations of students have gone through Jordan Middle School. At the show the evening of December 12, Cashman was handed a $1000 check from a couple in the audience. More information on the Jordan Auditorium Giving Tree can be had by contacting Suzanne Weerts at suzanneweerts@sbcglobal.net. Donations can be sent to Jordan Middle School Giving Tree c/o Stacy Cashman, 420 S. Mariposa St., Burbank, CA  91506. 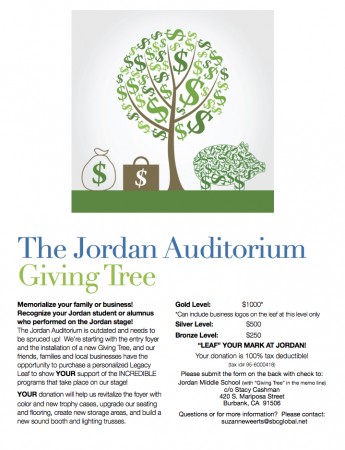 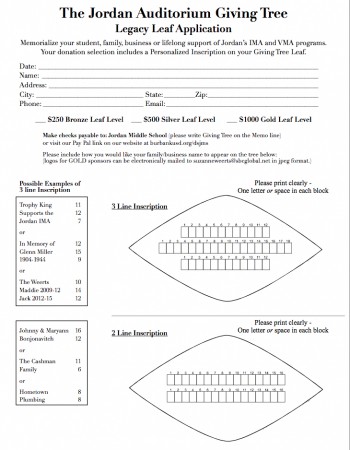