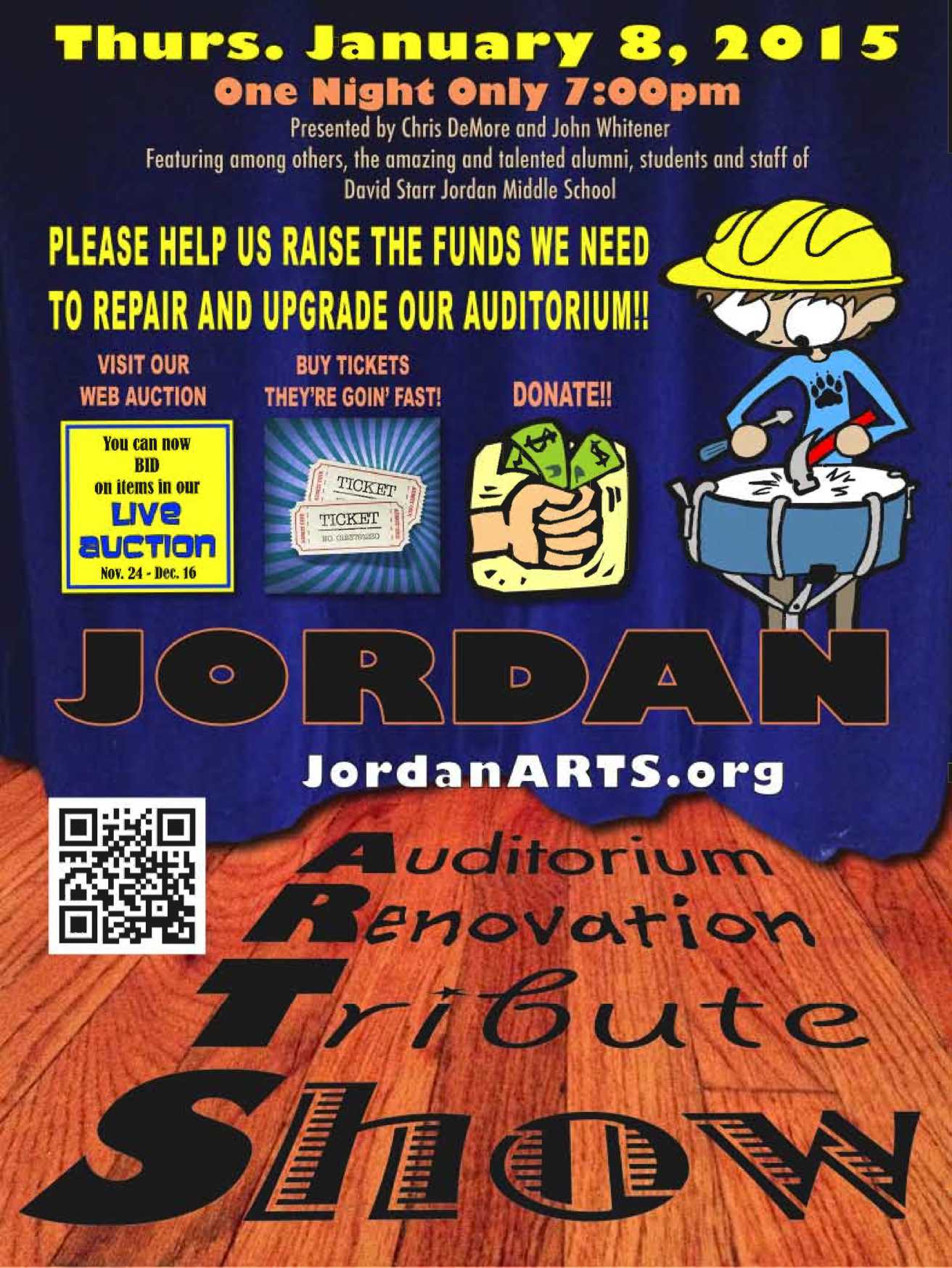 The David Starr Jordan Middle School community has drawn together to raise funds towards the school’s planned auditorium renovation, creating JordanARTS – the Jordan Auditorium Renovation Tribute Show. The group presents a fundraising show on January 8, 2015, at the school auditorium.

Vocal music teacher Christine DeMore and instrumental music teacher Dr. John Whitener will take the stage, along with JBHS graduates who continue to work with the middle and high school Vocal Music Association programs such as Dominic Matas, Amanda Richardson and Corey Hildago.

“We’re thrilled that the community is coming together in support of our auditorium,” said Jordan Principal Stacy Cashman. “Our award-winning music students deserve to learn and perform in a space that is worthy of their talents and inspires them to continue growing as musicians and artists.”

“Jordan’s auditorium has been the center of the Jordan community since it was built in 1948,” commented JordanARTS member Suzanne Weerts. “Through the years, the space has been used by the public for meetings, presentations and as a polling site.”

“It is a place for Jordan’s families to share in their children’s successes at honors assemblies, parent meetings as well as instrumental music, choir and theatrical performances,” she also said.

A VIP reception will precede the show at 5:30 p.m. on January 8, with live salsa music, a silent auction, “mocktails” and food catered by California Pizza Kitchen. The show begins at 7:00 p.m. Reserved tickets for the show and VIP reception are available at jordanarts.org.

The JordanARTS team is currently conducting an online auction through December 16, with items such as tickets to the L.A. Kings and Magic Castle, a WiiU game console and framed pizza box art from California Pizza Kitchen.

For those who may not be able to attend the show but would still like to support the JordanARTS cause, donations can be accepted on the booster organization’s website.

The JordanARTS team aims to raise $100,000 to upgrade the flooring and seating, construct a new sound booth, acquire lighting trusses and updated lighting equipment, build new storage for instruments and production materials and revitalize the lobby foyer with monitors and trophy cases.

While some funds from the Measure S Bond were spent on new air-conditioning, the rest of the auditorium upgrades cannot be paid for out of bond funds. John Muir Middle School held a successful auditorium renovation benefit show in February 2014.