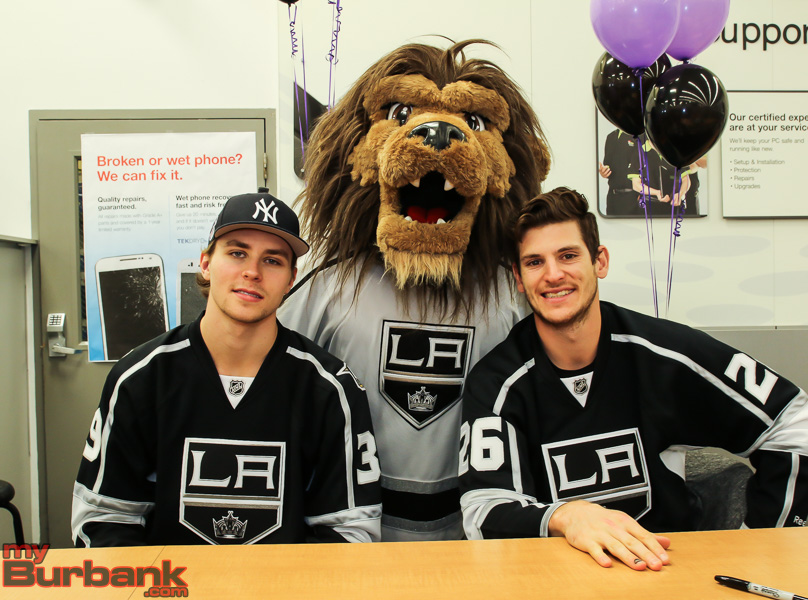 An opportunity to see, get autographs and take pictures with two Los Angeles Kings hockey players at Staples in the Burbank Empire Center was simply too tempting an offer as nearly 200 people lined up on Friday afternoon.

More than an hour before the scheduled event, fans had already formed a long line and when they spotted Nic Dowd and Adrian Kempe walking into the store, the excitement began.

“You look forward to these events and I think we’re given the position where this is something that we really enjoy,” said Dowd, a 26-year-old center who was drafted by the Kings in the seventh round in 2009. “It comes full circle.”

Dowd, who was born in Huntsville, Alabama, realizes the fans are truly important.

Kempe, a right winger picked in the opening round by the Kings in 2014 and recently called up from their minor league affiliate, the Ontario Reign, agreed with Dowd.

“It’s important to be close to the fans,” he said. “They get to know the players more.”

Kempe, a 20-year-old who hails from Sweden, said the Reign puts on five to 10 events similar to the one on Friday.

The Kings (30-27), who have claimed won two Stanley Cup titles, are in fourth place in the Pacific Division of the Western Conference and four points behind the Calgary Flames (32-26) for the final playoff spot.

The event lasted an hour and several members of the Kings Ice Crew and Bailey, the mascot, were also in attendance.

Kings fan Eric Reagan, who lives in North Hills, was attired in a Kings jersey and had a hockey stick he wanted signed.

“This is a lot of fun,” said Reagan, who indicated that he attends about 10 to 12 games a year at Staples Center. “I’m off today and I came down here to get this stick autographed.”

“I have pictures off the Internet to get signed,” said Rubin, who has attended three Kings games this season. “It’s an opportunity to meet the players. You don’t get this opportunity too often. I lived in Arizona the last two years, but now I’m back here.”

Ally Patten was sporting a Kempe jersey and a Kings baseball cap as she and her mother drove from Hesperia to attend the event.

“When he was down in Ontario, he flipped me a puck over the glass two years ago,” she said. “This is a lot of fun. Yeah, it’s worth the drive to come down here and get his autograph and take a picture of him.”

C.T. lives in Buena Park, had on a Kings jersey with cap and likes hockey because of the pace of the game.

“Of course it’s worth it,” he said. “I don’t go to too many games, but when these events occur and it fits my schedule, I’ll go.”

C.T. has been a Kings fans for about two decades and has a fairly extensive collection of Kings signed jerseys that include right winger Dustin Brown, defenseman Jake Muzzin and center Tyler Toffoli.

No doubt that Friday’s autographs and picture-taking will go along nicely with C.T.’s collection.

Elections 2022 Devin Herenda - September 28, 2022 0
Burbank City Council hopeful Nikki Perez is a longtime resident and JBHS grad who is sharing her background in community service and government for her myBurbank candidate profile.