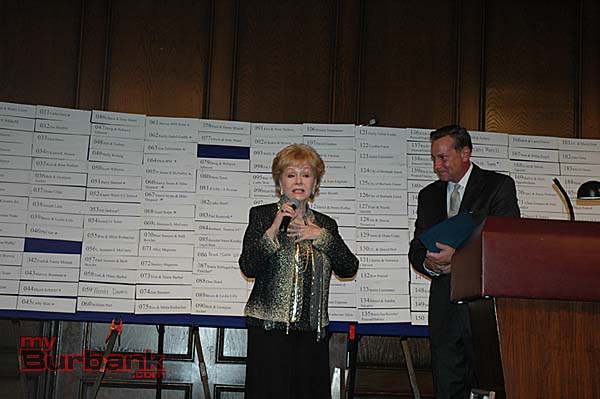 Debbie Reynolds talks about her early years in Burbank while master of ceremonies Johnny Holiday listens. (Photo by Joyce Rudolph)

The guest of honor was all aglow during social hour. Dressed in a black floor-length gown and bejeweled jacket, she posed with a choir from her alma mater John Burroughs. The students were the opening act for the 16th annual Gala, which raises funds for youth groups and others in need.

Reynolds, a former Miss Burbank, became a major film star in 1952 when she danced with Gene Kelly and Donald O’Connor in “Singin’ in the Rain.” She earned an Academy Award nomination for Best Actress in 1964 for “The Unsinkable Molly Brown.”

In his invocation, the Rev. Larry Stamper quipped that before there was Ron Howard, Johnny Carson or Jay Leno to make Burbank famous, there was Debbie Reynolds–the 1948 Queen of Burbank.

“Through her movies, music, TV, live theater and writing, she has truly been Burbank’s ambassador to the world,” Stamper said. “Tonight our queen has come home to help us raise money for the Burbank charities. Tonight we want our charity work to be like our homecoming queen–unsinkable.”

Master of ceremonies was singer Johnny Holiday, who has performed in big name nightclubs across the country. Holiday is the nephew of Bing Crosby and in Bing’s collection was Reynold’s first album called “Debbie.”

Mayor Emily Gabel-Luddy presented a proclamation on behalf of the City Council to Reynolds. While reading her many accomplishments, the mayor paused.

“I have to say your graciousness is overwhelming,” she said.

Renditions of the song “Tammy” from the film “Tammy and the Bachelor”, for which Reynolds received a Gold Record, were performed by the Burroughs’ choir and Suzanne Dunwell, field representative for Assemblyman Mike Gatto.

Dunwell wrote a parody and handing out a sheet with the new lyrics, invited the audience to sing along on the chorus — “Debbie, Debbie, Debbie we love.” It received a rousing applause.

Reynolds thanked the government officials for the accolades, adding she didn’t expect them. She was merely there to “back the Kiwanis because anything you do, I would always be in your corner  and here to help out and I love Burbank.” 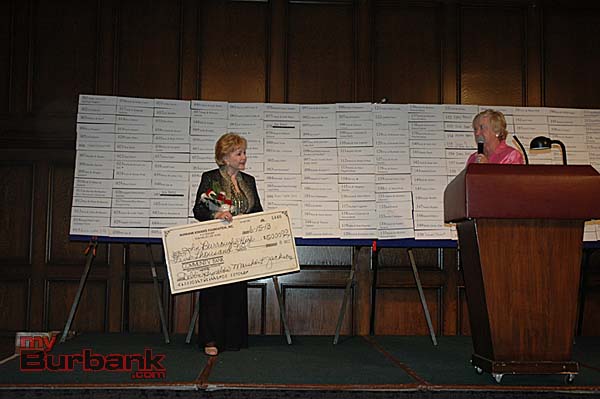 An over-sized check for $5,000 was presented to Burroughs Performing Arts Department in Reynolds’ name from Gala Chairwoman Marsha Jackson. Jackson met Reynolds at another event and Reynolds promised she would attend a Kiwanis fundraiser for Burroughs because that was where she got her start in singing and dancing.

The event was one of the most memorable events we have ever had, said Kiwanis Club President Gary Kessler.

“I give all the credit to Marsha and our committee,” he said. “I thought that Debbie was fantastic! It was great to see all the people in the community come out to support us along with the community leaders.”

Rounding out the evening was a silent auction, live auction and reverse opportunity drawing won by Thomas and Theresa Engman, whose names were both remaining on the board, the Bob and Georgine Archer family, the city of Burbank and former councilman Larry Tate — who each received $1,000. 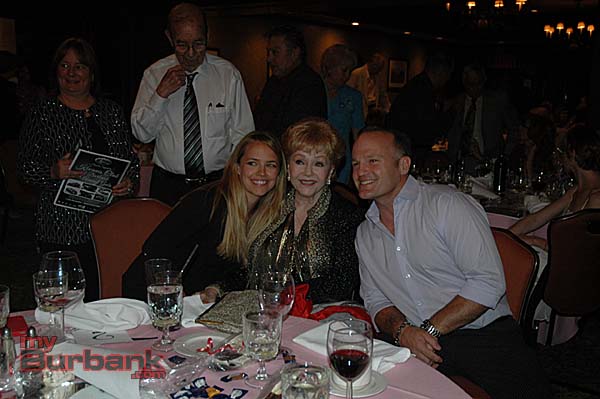 Jessica Barth, left, and her fiance Danny Cusumano pose for a photo with Debbie Reynolds (Photo By Joyce Rudolph)