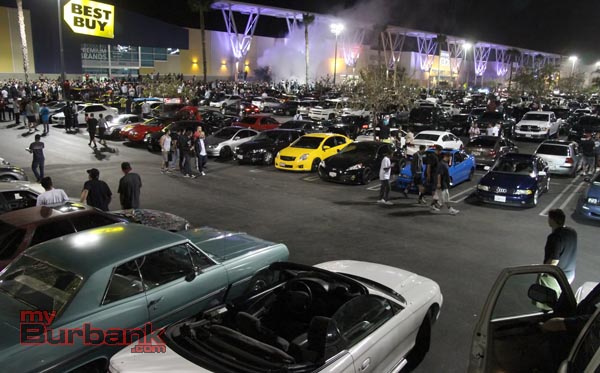 Thousands of spectators showed up with about 500 cars that jammed into the packed Empire Centers parking lot again this past Tuesday evening. Called Krispy Kreme Tuesdays, the event drove regular shoppers out of the lot early in the evening.

Burbank Police motor officers were present, monitoring the situation. The parking lot is private property and the officers patrolled the streets around the center bounded by Buena Vista and Victory Boulevard. The officers enforced traffic laws when they observed violations on the city streets.

It was determined that the crowd and the amount of cars outgrew the capacity of the parking lots and the motor officers then closed the surrounding streets. The Empire Center businesses closed at 9:00 p.m. and with all street entrances to the Center closed, many of the cars left.

Several hundred stayed behind and were seen revving engines and doing burn outs of their tires, causing smoke and the smell of rubber to fill the air.

Burbank Police were assisted by patrol officers from Glendale Police Department, along with an air unit from Pasadena Police.

The Burbank Police motor units stayed in the area until close to 11:00 p.m. At that time, only a few stragglers remained. Officers made sure the groups didn’t descend on other empty lots in  the area.