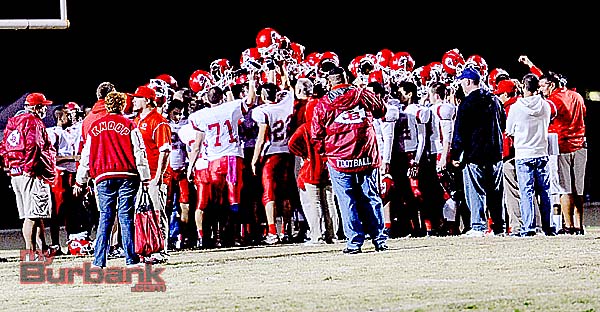 Facing the No. 3 seeded team in the CIF Southeast Division on the road in Whittier, a great effort by Burroughs would be needed to advance to the quarterfinals. Unfortunately, the stars on this evening did not align. Nor did they shine brightly.

With starters Hawkins Mann, Javier Pineda, Brad Peppmuller and Jacob Nutty out of action and dressed in civilian clothes, the depleted Indians were no match for a powerful La Serna squad who won going away, 55-7. 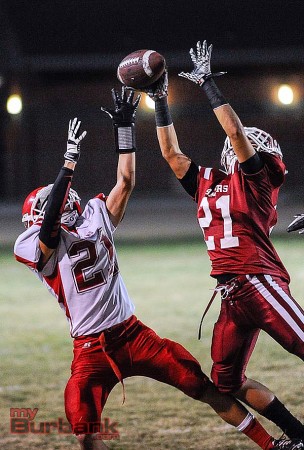 Blackjack anyone? Burroughs’ Aidan Anding (lt) goes up for a pass (Photo by Craig Sherwood)

The Lancers took the opening drive and scored in six plays to take a 7-0 lead. On Burroughs’ first offensive play of the game, a fumble occurred on an exchange in the backfield which La Serna recovered. Two plays later the score was 14-0 at the 10:34 mark.

“I was a little disappointed that we couldn’t play with some of our best kids and give it our best effort,” Burroughs coach Keith Knoop said. “You can’t play a team like that without being at your best. We can’t afford to fumble the ball on your first play of offense on the four-yard line. You can’t spot them 14 points and expect to come to play.” 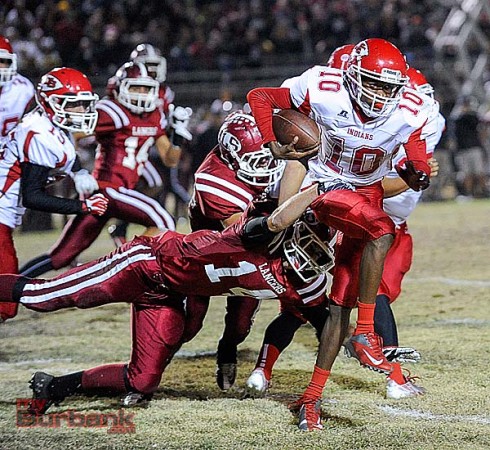 With the highly skilled and energetic Mann watching his teammates helplessly, the Indians’ defense played as poorly as it has all season long. The offense was just as inept without the hard-nosed running of Pineda.

Two Burroughs punts and two more scoring drives by the Lancers resulted in a 27-0 first-quarter advantage for the host school.

The lead quickly grew to 41-0 at the half as La Serna imposed its will on an Indians defense that looked disinterested and out of focus. 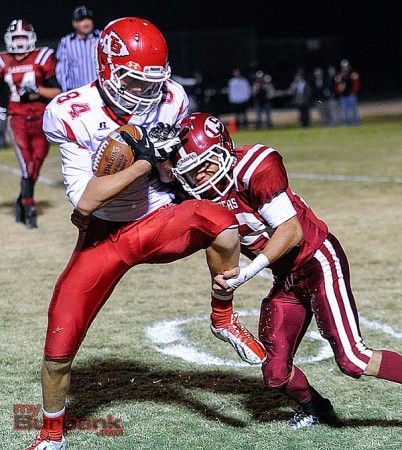 Max Chamberlain scored on this play; a six-yard pass from Angel Manzanero (Photo by Craig Sherwood)

The second half was more of the same. Burroughs fumbled the kick-off and La Serna scored on its first play of the half ripping off a 32-yard touchdown run. The Indians’ fifth turnover of the night was parlayed into another Lancers’ score on the ensuing possession.

It culminated a nine-play, 52-yard drive that was the most productive of the game for the Indians.

Manzanero made the most of his minutes completing a handful of passes while gaining 42 yards with a few nice runs.

Michael Ospina was the leading ground gainer for JBHS with 56 yards on nine carries. 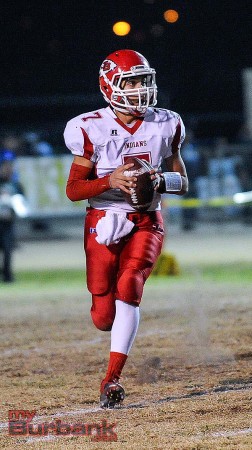 The Indians ended the season 6-5 overall and 5-2 in the Pacific League. For 36 seniors, the loss Friday night ended their high school football careers but it did not define the season they had.

“We finished above .500. We played some great football this year,” Knoop said. “We didn’t finish how we wanted to with the last two games. It took us a while to get rolling but once league started I thought we played well.

“A lot of the seniors in the program we had for four years since they were freshmen. It’s a rarity to get 36 seniors that have all played together at some point in the program. That just doesn’t happen anymore. Hopefully they can put aside the last two weeks and see what they have done. They made it to the playoffs and reached some of their goals.”

Blackjack anyone? Burroughs’ Aidan Anding (lt) goes up for a pass (Photo by Craig Sherwood)

Max Chamberlain scored on this play; a six-yard pass from Angel Manzanero (Photo by Craig Sherwood)