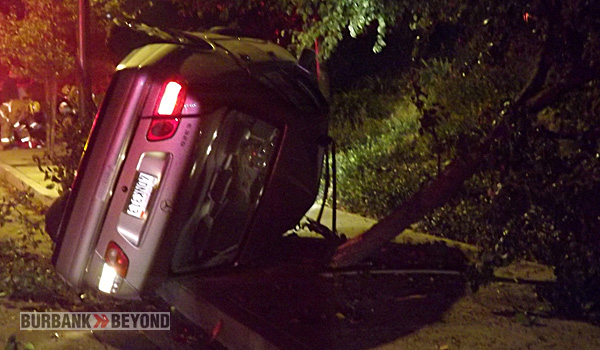 At around 10:45 Monday night, Burbank Police along with Burbank Fire Department responded to a reported single vehicle traffic accident near the Burbank Animal Shelter with the car overturned.

Burbank PD was first on scene and reported that a vehicle was flipped over on the sidewalk with the driver and his small dog out of the vehicle. The driver was reported traveling northbound on Victory at a high rate of speed before he lost control of his car and flipped several times through the air where he then landed on the opposite side of the road upside down in the bushes.

Before coming to rest in the bushes, the car snapped a tree in half which pierced the side window of the car missing the driver by inches. Amazingly, the driver escaped with non life threatening injuries but was transported to the hospital with multiple lacerations to his face and a possible concussion. The dog appeared to be okay but will probably demand to drive next time.

Southbound Victory was closed for over an hour in the area for the clean up and duration of the investigation.