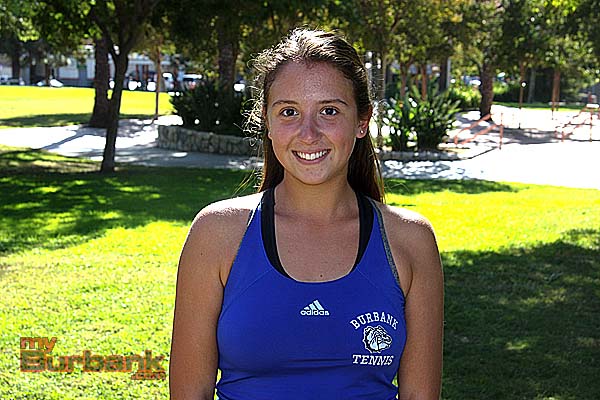 Moving from one house to another can be quite a pain. The packing of boxes, the re-organization of your personal belongings and the man-power that is involved is a mighty task that wears on you mentally and physically.

Now imagine yourself packing up to leave your….country.

Moving from one country to another is a life adjustment and possibly the most challenging one for a person. For Burbank junior tennis star Lilit Vardanyan, as one door in her life closed another one opened.

Vardanyan, born in the Ukraine, moved to Armenia when she was young and fell in love with the game of tennis. In 2009, her family moved to the United States and called Burbank home. At the time, Vardanyan didn’t realize there would be an abundance of opportunities at her fingertips when she moved to America.

Her passion for tennis only grew when she discovered that she could play tennis anywhere at any time. Her move from half-way across the world gave her instant appreciation of the United States. It gave her a sense of purpose and the chance to thrive in a sport that she now plays all the time.

“It helped me because it gave me many opportunities to play. I can play in a lot of tournaments now,” Vardanyan, 15, said. “We had to go out of our country to play tournaments in Russia or Georgia. Here you can go to Anaheim, Irvine and other places every weekend.”

She has played and played and played some more. Vardanyan has the keen ability to play singles or doubles and just be as effective. She is currently ranked No. 72 by the United States Tennis Association in Southern California for 18-and-under.

Vardanyan has blossomed into one of the area’s finest tennis players. As the No. 1 singles player for Burbank High, Vardanyan has led a group of ladies to within reach of the program’s first league title since 2002 when BHS was in the Foothill League.

Two more wins for the Bulldogs and girls tennis will have its first league title in 11 years.

“It’s been amazing so far,” she said. “We definitely have chemistry together. We are always there for each other and we do our best.”

A year ago Vardanyan injured her wrist and was a non-factor in league play. This year she has become the league’s most dominant player who has a legitimate chance to win the Pacific League singles title in a couple weeks (October 28 and 30).

“I think she is the best player right now in the Pacific League,” Burbank coach Loi Phan said. “Unless she has an awful day, I don’t think anyone is going to beat her. She is strong.”

Vardanyan has been playing tennis for 10 years now. She has begun to peak at the most opportune time for the Bulldogs, who are ranked No. 5 in CIF Division II.

Her current overall record is 40-1 and she is undefeated during league. Vardanyan’s spectacular play along with the success of the senior class has been the staple points for a great season thus far.

“Lilit has gotten a lot stronger physically and she is a lot tougher mentally too. Her game has completely changed,” Phan said. “She is a smarter player now and she is so nice to coach.

“She has added touch to her game which makes her better this year. For the year-and-a-half I’ve had her, it was just power. But now she actually has touch.”

In addition to Vardanyan, Burbank relies on the leadership of six seniors who have played for Phan since the day they entered Burbank High- Mackenzie Emi, Meredy Gharabegi, Gabrielle Markari, Veronica Mendoza, Natalie Pickens and Elizabeth Sanchez.

“They know what they have and they want to win. They are not satisfied. We will give it our all, win or lose.”

Freshman Nicole Merrit has been a strong addition to singles allowing Phan to mix and match his other players against various opponents.

Burbank (12-2, 9-1 in league) is tied with Arcadia after splitting matches with each other. The Bulldogs knocked off Arcadia several weeks ago, 10-8, and tied 9-9 last week only to lose 78-77 in games. If Burbank can win out, they will be the No. 1 seed out of the Pacific League.

“We do believe. We are confident,” Vardanyan said. “This is something that I have definitely been training for. I really wanted to do well this year. I want to win a league title for the seniors.”

Gharabegi and Sanchez have become a formidable No. 1 doubles team for Burbank. They represent a senior class that Phan will surely miss after four memorable years together.

“This is the best group I could ask for,” Phan said. “To see them grow as freshmen until now has been special. It’s a great group of players.”

Vardanyan recognized Phan too for the impact he has had on the whole team.

“We love Coach Phan for everything that he does,” Vardanyan said. “We love the team so much. We want to stick together and do well at the end of the season so we can remember it the rest of our lives.”