Tom LaBonge a familiar face around Burbank passed away at his home Thursday he was 67 years old. LaBonge a Los Angeles City Councilman whose district was the 4th district which covered Toluca Lake and most of North Hollywood Griffith Park, Sherman Oaks, Los Felix, Silver Lake, and more. 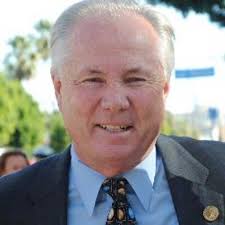 LaBonge was a regular customer at The Smokehouse Restaurant here in Burbank, in fact when he retired from his City Council position he hosted his farewell party at the restaurant. The event had numerous celebrities and local dignitaries in attendance. https://myburbank.com/smokehouse-hosts-farewell-party-for-l-a-councilman-tom-labonge/

Burbank’s largest employer Warner Bros was represented by then-Vice President of Community Affairs Lisa Rawlins who presented him with a plaque of gratitude, she was quoted as saying ‘ More Film Permits & Television Shows were Filmed in his district than any others in the City’.

Toluca Lake Honorary Mayor Fritz Coleman was present and used the stage to try out some of his comedy referencing LaBonge in most of his jokes.

LaBonge was well known for his love of Griffith Park and all the parkland around it. He was present at the Station Dedication and Naming of the Los Angeles Live Steamers Railroad Museum known as Sherwood Station named after our Managing Editor’s late father Gordan Sherwood who created the Live Steamers at Griffith Park.

Tom was best know as the City’s largest ambassador even though he was a LA Councilman when he spoke he always showed his love toward the City of Burbank.

It’s being reported Tom LaBonge died of Cardiac Arrest in his home. No services have been mentioned at this time. He is survived by his wife Brigid Manning LaBonge and kids Mary-Cate and Charles.