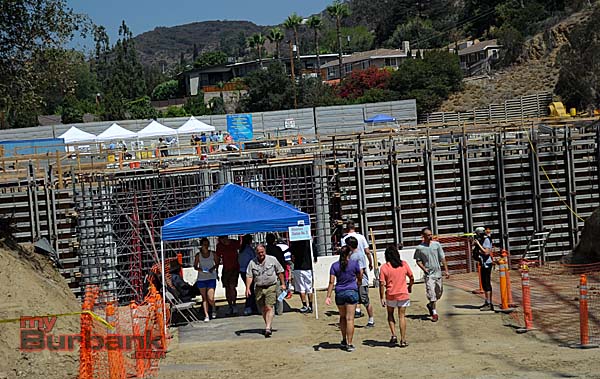 Everyone is always curious about what is going on behind the fence when it comes to construction projects – especially in their neighborhood.

With construction in full swing and nearing completion at Burbank’s Reservoir #1, located above Sunset and Palm, it has not been easy to see inside the fences.

Costly repairs and maintenance led the Water and Power to replace the old reservoir that was built as an earthen dam and will now be replaced as a concrete structure, that is being structurally engineered to resist strong ground shaking that can be associated with earthquakes.

This new structure will also  help the Burbank drainage system.  the water stored can be used for drinking, fire fighting and other emergencies.

Reservoir Number 1 will actually two in one, with a retaining wall in between so that half of the reservoir can be taken down for maintenance while still keeping the other half working to meet the needs of customers. Presently, ‘1-A’ is near completion while ‘1-B’ has yet to have its roof installed.  When filled, each will hold approximately 4.75 million gallons of water.

According to Michael Thompson, Principal Civil Engineer for the City of Burbank and who is overseeing the project, this update was needed.

“Since the old one was built in 1928, materials are significantly better then back in 1928 and this structure will easily last for the next 100 years”

Thompson has overseen projects like this in the past as he previously worked for the Castic Water District before coming to Burbank, where he has lived for over 20 years. As a Burbank resident, he also knows the City and the quality of life here is important to him for the sake of local residents.  He has mandated to the construction company that while they may be on scene starting at the Burbank code allowed 7 am for work, crews are not to make any noise that will disturb residents for the first hour.

“Most people are getting up by 8 am and getting ready for work so we do what we can to stay quiet in the beginning of the morning”, said Thompson

While Reservoir #1 is being rebuilt, there are still four other reservoirs that are serving the City.  There are two located higher up on the hill, another below the ball fields at Brace Park (that holds 25 million gallons) and another below ground near Hollywood Way between Victory and Pacific that holds another 5 million gallons.

Residents were permitted to actually walk down inside ‘1-A’ and look at the enormous structure while also taking a look at ‘1-B’ which is awaiting its roof which is going to be poured soon.

Thompson has been working with the project since its inception and will see it through to the end. “We are currently under budget and expect completion to be on time”

Burbank Reservoir #1 is scheduled to be completed and operational by October of 2013.  A website has been set up for residents to monitor its progress at www.burbankreservoir1.com.

Interesting Fact: Both Reservoir #1 and the reservoir that sits underneath Brace Park are exactly 904 feet above ground, allowing both to work in sync.