The project started several years ago after a vision was thought of and with the help of parents, grandparents, community members, and the staff of Luther Middle School with at last but not least the Partnership of Warner Bros. Studio Facilities, a new, renovated auditorium is in place.

There is new seating, new lighting, new sound equipment, new spotlights, a refinished stage floor,and almost everything you would find in a BroadwayTheater. The project cost in excess $30,000 and with cookie dough sales, wrapping paper sales and and grants from Burbank Arts for All, as well as other donations, last night the vision was seen when the curtain opened for the opening night of ‘The Music Man’.

The house was packed with Warner Executives and parents and friends alike. The show business term ‘Break A Leg’ means ‘ Good Luck’ on opening night and for every other performance that will be held in the new auditorium. 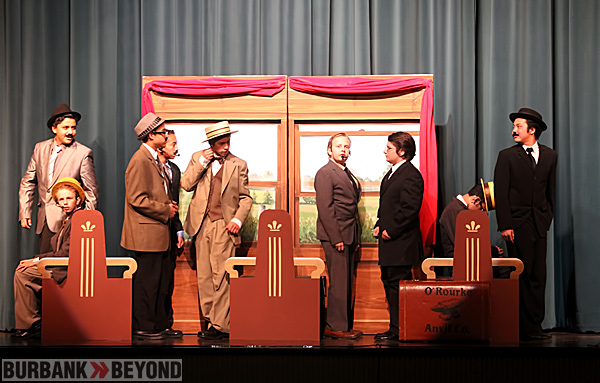 Scene 1 A Railway Coach in the opening scene of 'The Music Man' preformed by Luther Middle Schools students Friday evening.(Photo by Ross A. Benson)

Students at Luther Middle school preform 'The Music Man' in their newly refurbished auditorium. (Photo by Ross A. Benson)