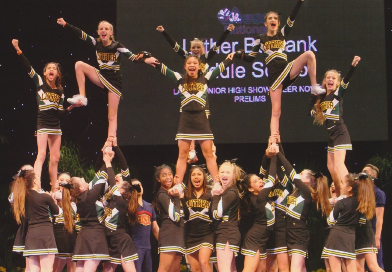 After competing against five other teams with a near-perfect performance in the preliminaries at Junior Nationals, the Luther team was announced as a finalist, according to Gabriella Platten, speaking as a representative of the squad. They competed against two particularly tough teams.

Coderko, a Burbank High School cheerleader and 2008 graduate, has led the squad for the past five years.

“I am so proud of my girls for earning second place out of six teams at Junior Nationals,” commented Coderko. “This is only our third year going to Nationals and the team has already left its mark and shown other teams that Luther is a serious competitor.”