Burbank police responded to the 1200 block of Reese Place on Thursday about  11:40 AM, the  regarding a man armed with what appeared to be an assault rifle.

Officers responding to the area and learned that the suspect had exited a nearby home holding the rifle, and then pointed it at a 47 year-old female victim who was with her 17 year-old son who believed the rifle was real and felt their lives were in immediate danger.

A perimeter was established around the house in which the suspect was believed to be. With the assistance of an air support unit, several verbal announcements were made instructing the suspect to exit the home.

After a short time later, the suspect approached officers on foot and surrendered. The suspect was not in possession of the rifle at that time, but declared to officers that it was a BB gun. 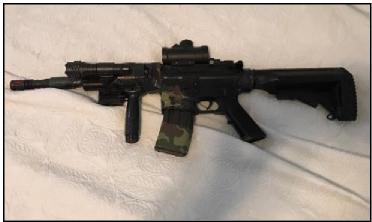 Burbank Police Detectives conducted a search of the suspect’s residence pursuant to a search warrant and recovered an airsoft rifle resembling an automatic assault rifle (pictured).

The suspect has been identified as Jose Luevanos, 25, of Burbank. He was placed under arrest and booked for displaying an imitation firearm in a threatening manner, and is being held on $15,000 bail. Luevanos is due in court on Friday, February 17.

Burbank Police wanted to remind the community that the misuse of an imitation or replica firearm, like the one pictured, can result in potentially deadly consequences. Because of this, there are strict laws governing their misuse which carry serious penalties.