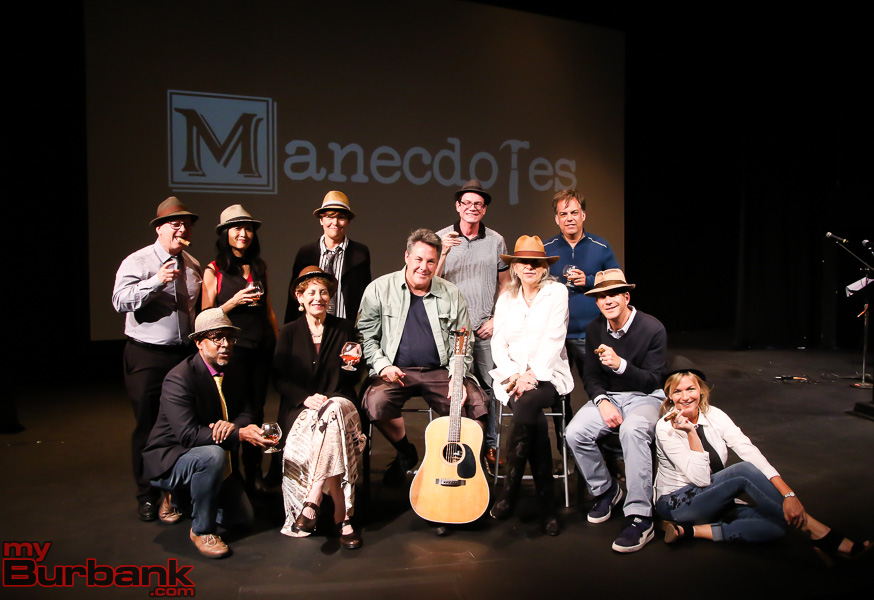 Ten local storytellers share true stories of fatherhood for Manecdotes, a one night only show, on Sunday evening, June 3 at The Colony Theatre in Burbank.

“I’ve produced three storytelling shows about motherhood and at one of them, my friend David Laurell (former Burbank Mayor) came up to me and asked, ‘Where are the stories about fatherhood” and I realized that, while I occasionally hear dads come up in stories, I’d not seen a show where fatherhood was the theme,’ she said. “And so Manecdotes was born!”

“Our cast is half men sharing their experiences as dads or what they learned from their dads while the other half of the cast are women reflecting on the legacies of their fathers in their lives,” explained Weerts. “The relationships may be funny or they may be difficult, but so many of the truths that are revealed are relatable and will make the audience laugh with connection and feel through reflection.”

“Every time we put on one of these shows, people fill the lobby in awe afterward and I hear ‘I wish you were doing another night!’ or ‘My father, husband, friends, colleagues would have loved this! So we urge people to get their tickets before this ONE NIGHT ONLY production sells out!”

As a Producing Artistic Director for JAM Creative, Weerts develops storytelling productions as benefits for worthy causes. To date, JAM Creative has raised over $10,000 for local charities since 2016.

“Our entire cast is thrilled for the opportunity to help raise funds and awareness for the important work of Family Service Agency through this production, knowing that FSA has made such an impact on our community in the 65 years of their work in Burbank.”

Manecdotes stories include: “a man recalls his parent’s bitter divorce and how he learned to forgive his dad, and one father tells the tale of a particularly difficult sleepless night when his daughter was little. In one story, a gangster father influences his daughter’s wedding plans while another woman shares how her WWII veteran dad refuses to move into a nursing home. One father adopts a special needs infant and his life changes immensely and another dad realizes he’s transferring own fears to his young daughter at a playground.”

“I’ve been involved with personal storytelling since 2004,” commented Switkes, whose father, Joseph fought in the Battle of the Bulge and served throughout Belgium, France and Germany from March 1943 through November 1945.  “During that time, I’ve come to appreciate that the process of crafting a true, personal story helps me understand and organize my life.”

“The story about my father, which I will be sharing at Manecdotes, has helped shape my memories of Dad. I look forward to sharing those memories with the audience. Maybe my memories will help others tap into theirs.”

“Having been through a very traumatic and trying situation, I enjoy having the ability to share my thoughts and experiences with others as either inspiration or motivation that life does get better and pain – while still there – fades with the passage of time,” said Freedman, who lost his wife shortly after childbirth.

Live music by local folk singer Robert Morgan Fisher opens the show at 6:30 p.m. and the 90-minute program of storytellers begins at 7:00 p.m.

General admission tickets are $25 and can be purchased at jamcreativegroup.com. The Colony Theatre is located at 555 N. Third Street in Burbank. Plenty of free parking is available on site.