With tensions running high after Monday’s terrorist bombing at the Boston Marathon, local law enforcement responded in full force Tuesday when a passenger on a Metrolink train made a possible bomb threat. 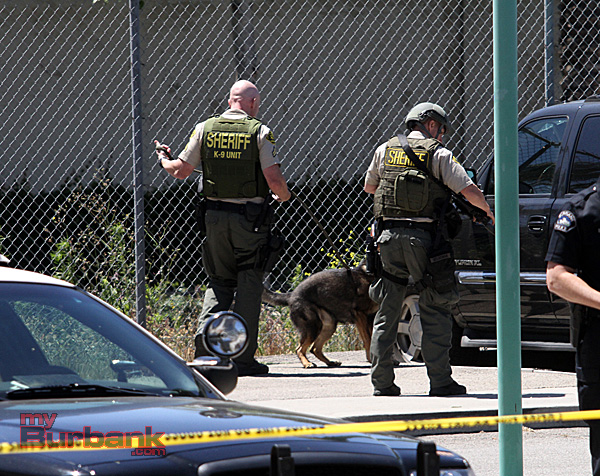 Sheriff’s K-9 Units checked cars in the parking lot of the Burbank Train Station. (Photo by Ross A. Benson)

According to police, a female witness noticed a man walking around the Burbank Train Station speaking in a rambling manner.  When the man boarded the train he made a comment about the bombing in Boston, and that he had a bomb.  She then notified the train conductor, and the Los Angeles Sheriff’s Department was notified.  The Sheriff’s Office is responsible for security on Metrolink trains.

The train was halted at the Burbank Station at 12:28 p.m.   Officers from the Burbank Police Department were first on the scene, and evacuated the passengers from the train.  They were escorted to a safer area away from  the train. The suspect initially refused to leave the train.  He finally got off the at about 1 p.m., and was detained by officers.

Twelve Burbank officers responded to the incident, along with the patrol captain, watch commander, two sergeants, and detectives.   A command post was set up uner the Olive Ave. overpass, on the west side of the train tracks, near Flower St.  The Burbank Fire Department also responded to the train station.

The Sheriff’s Bomb Squad, along with bomb-sniffing dogs rushed to the station from Sylmar.  The three double-deck passenger cars were searched and no bomb or other suspicious packages were found.  Because the suspect was seen in the parking lot of the Burbank Train Station, the parking lot and train platform were also searched. 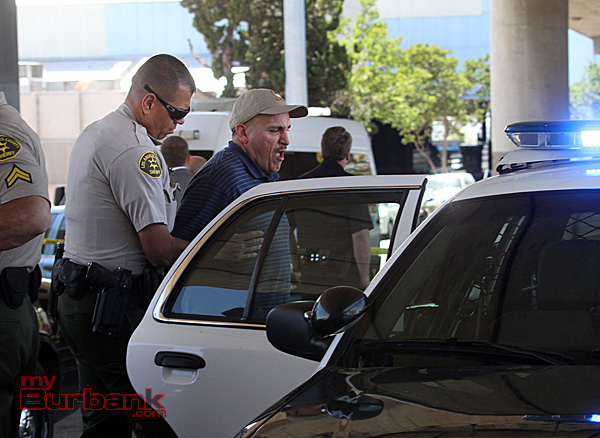 Unidentified man who is suspected of making threats on a MetroLink train is taken into custody. (Photo by Ross A. Benson)

The unidentified suspect was taken into custody the Sheriff’s Deputies on an unrelated warrant.  It has yet to be determined if he will be charged with a crime regarding his comments on the train.

According to Metrolink Public Information Officer Scott Johnson, 45 passengers were on the train when it stopped at the Burbank Station.  When the incident finally came to an end, 20 passengers got back on the train to continue their trip to Glendale and Los Angeles Union Station.

Burbank’s MetroLink Station is secured by LA County Sheriff Officers, while a suspicious item is checked out. (Photo by Ross A. Benson)

Local Channel KNBC Ch-4 interviews a witness that was on the MetroLink who heard the suspect make threats. (Photo by Ross A. Benson)

Unidentified man who is suspected of making threats on a MetroLink is taken into custody. (Photo by Ross A. Benson)

Sheriff’s K-9 Units checked cars in the parking lot of the Burbank Train Station. (Photo by Ross A. Benson)

A Sheriff’s Officer stands by in the parking lot of Metrolink while Bomb sniffing dogs check cars out for any suspicious devices. (Photo by Ross A. Benson)