The sound of happy voices echoed throughout the ballroom of the Los Angeles Marriott Burbank Airport Hotel. 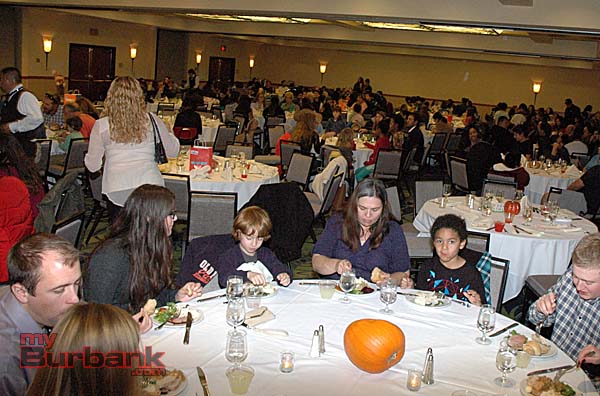 More than 300 Boys & Girls Club members and their families dine in the Marriott’s main banquet hall.

More than 300 Boys & Girls Club members and their families were being treated to an early Thanksgiving dinner on Nov. 13.

Coming down the buffet line, Alicia Perez, 10, and her friend, Alexa Medina, also 10, were choosing items for their plates.

“This is nice,” Alicia said. “They have food that’s good and they are celebrating Thanksgiving before it happens!”

Four-year-old Dean Herman, the son of board member Paul Herman, was maneuvering a spoon of whipped cream into his mouth. 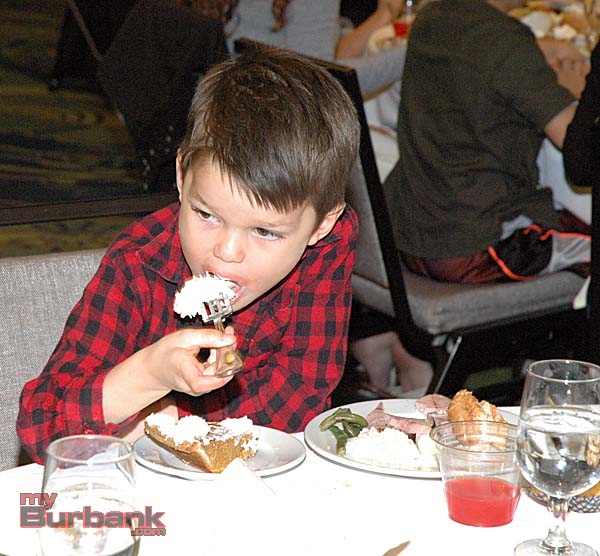 Dean Herman, 4, is more interested in the whipped cream on his pumpkin pie than the ham on his plate

“It’s really nice of the Burbank Marriott to give back to the community,” Paul Herman said. Joining him at the table was his wife, Amy, and daughter Agnes, 8.

This was the first time the Marriott had invited the Boys & Girls Club to have Thanksgiving dinner at the hotel. The staff has always brought the meal to the clubhouse at Buena Vista Street and San Fernando Boulevard.

It felt wonderful to serve so many families, said Alan Tate, director of sales.

Angela Vickers was sitting at a table with her 5-year-old daughter who is a member of the club. Her two older children have already come through the after-school program.

“This is our first time coming to the Thanksgiving dinner but it’s amazing,” she said. “It’s delicious food and the kids are having a good time.” 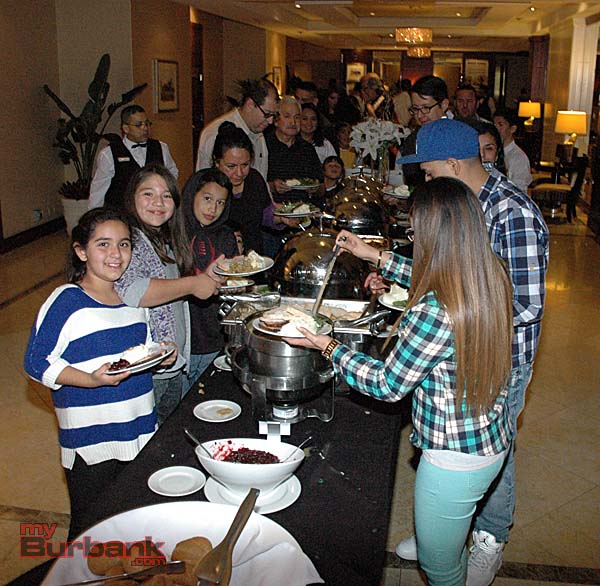 Boys & Girls Club members Alicia Perez, left, and Alexa Medina, fill their plates with turkey and all the fixings at the Los Angeles Marriott Burbank Airport. (Photos by Joyce Rudolph)

Her daughter goes to one of the schools sites where she receives help with her homework and interacts with some of her classmates who also come to the site, Vickers said. Her two older children continue to come back to see the woman who is still in charge of the site.

Shanna Warren, chief executive officer of the Boys & Girls Club, noted that the Marriott staff really stepped up and accommodated more guests than she thought would come.

“We were expecting, at the most 200, but we ended up with more than 320, but the Marriott staff have been so gracious and have been able to accommodate all the additional people,” she said. “They have been catering our Thanksgiving dinner for the last several years but it’s always been at the club.”

Boys & Girls Club officials recently sat down with Marriott representatives who told them they would like to get move involved with the club because the club is so close in proximity to the hotel and the club’s annual gala is there every year.

“So we talked about different ways we can partner with them and get their employees more involved,” Warren said. “When the subject of the annual Thanksgiving dinner was brought up, the Marriott said the facility wasn’t booked, so it was decided to have the dinner here.”

In addition to a power point presentation, there were live performances provided by the club’s Creative Arts Team, Warren added. 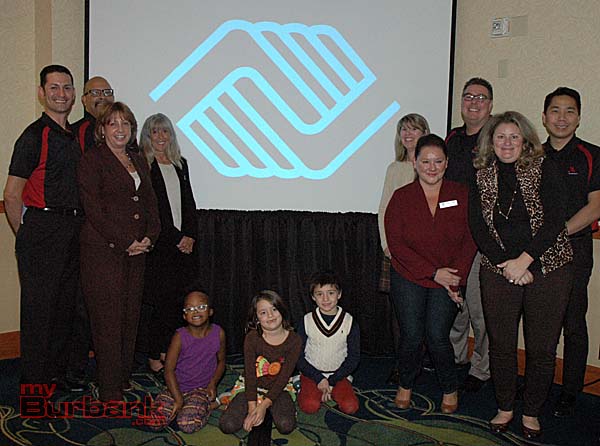 Marriott employees and Boys & Girls Club employees and members pose in front of the logo cast on the projection screen during the Thanksgiving dinner at the hotel.

General Manager Richard Sandoval wanted to create a way for the hotel staff to really get involved in the spirit of giving during the holiday season.

“The Boys & Girls Club of Burbank is our charity of choice and we love being the host site for their annual gala in May, but we wanted to do more,” Sandoval said. “By hosting the event at the hotel, our team gets to interact with the Boys & Girls Club members. It’s a great way to kick off the holiday season.”