Burbank Mayor Emily Gabel-Luddy presented her State of the City address to a packed house at the Airport Marriott Wednesday in the annual event sponsored by Burbank’s Chamber of Commerce.

Since 2008, other Mayors have had to go in front of the local business community and try and sound positive about the downturn of 2008, although the theme was usually about some budget cuts that would have to be made to balance the budget.

Finally in 2013, Gabel-Luddy was able to not only the business leaders that things were looking better, but that the City of Burbank now has a projected balanced budget through 2018.

Her presentation was split into three sections and moved quickly while giving out the necessary information.  The first part was in the form of a speech where the Mayor talked about the previous year and some of the turmoil that was beginning top end.  The hiring or a permanent Police and Fire Chief, as well as Community Development Department Head.

“Burbank’s financial status is strong, with Standards & Poor’s giving the City a AAA Rating”, said the Mayor, “and that is something that is earned and not just given”.

She also went on to talk about the improvements in Burbank’s infrastructure including the money earmarked for repaving streets, Johnny Carson Park, Northwest Library, and Verdugo Park’s Pool as well as the Reservoir #1 which is just about complete.

After a short video, she then asked a few questions to attendees including a not so surprised City manager.

Newly hired City Manager Mark Scott showed that he already fees at ease in his new position and his experience shows. Not only did he seem comfortable talking to the movers and shakers that make up the Burbank business community, he was able to inject a little humor when it came to his surprise at being picked from the crowded room.

Scott commented about the small city feel of Burbank and commented that his has realized that everyone in Burbank went to one of the schools here and that people have a deep concern for the  City.  He also stressed that he looked to help businesses maintain their employment levels and stressed how he wanted to work with the many small businesses in Burbank.

Developer Michael Cusumano also spoke on the Downtown Businesses and their recent successful events as well as the future.  The members Downtown Burbank Partnership have been working tirelessly to attract business to the downtown area for years.

Gabel-Luddy showed that in her term as Mayor, it is all about the flow of information that can make a successful State of the City address, not the length that some would lose interest in. 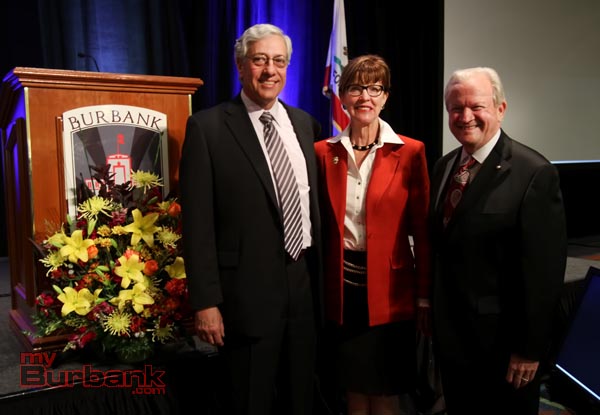