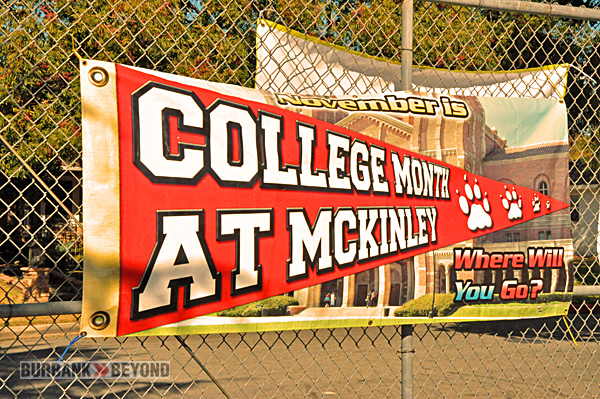 First through third graders at McKinley Elementary School showed their colors on Monday morning as classes split up to represent their favorite Los Angeles area university.  The children divided into teams, one side UCLA, the other USC, and then it was off to the races as each group ran a series of relays with enthusiasm easily matching their elder upperclassmen’s university rivalry.

“They love it” commented Jenny Harris, PTA Representative in Charge of College Rivalry Day.  That was very apparent given the squeals of laughter and joy coming from all the competitors.  Whether the children knew the difference between UCLA and USC was not important – they were having a lot of fun.

November is College Month at McKinley.  Activities planned to get children thinking about their academic future include wearing college T-Shirts, hanging college pennants in the hallway from schools located throughout the country, and taking a field trip to UCLA.

But today was the relay competition.  Originally planned for last Friday, prior to the crosstown classic pitting UCLA against USC football teams at the Rose Bowl, rain postponed the matchup until Monday morning.

The children did not mind the delay a bit.  In a demonstration of teamwork, determination, blue versus red, all competitors gave it their best.  “Some kids are excited about academics, some about sports” noted Harris.  Each child, in addition to having a great time, learned valuable life lessons in both competition, as well as working together to achieve goals.

It is unclear whether the UCLA side or USC side of each class won their competition, and in fact was not important.  The record book will simply state “classes had a lot of fun, learned a few lessons, mission complete.”