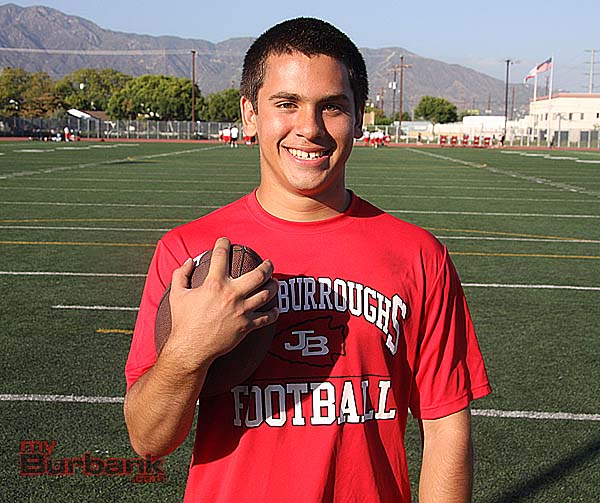 Stand Navy out to sea, fight our battle cry!
We’ll never change our course so vicious foes steer shy-y-y-y!
Roll out the TNT, anchors aweigh!
Sail on to victory, and sink their bones to Davy Jones, hooray!

Anchors Aweigh, my boys, Anchors Aweigh!
Farewell to Foreign Shores, we sail at break of day-ay-ay-ay;
Through our last night on shore, drink to the foam,
Until we meet once more, here’s wishing you a happy voyage home!

When music accompanies these verses, the words come to life for any Midshipmen. Those are the first couple of verses of the U.S. Naval Academies’ fight song. Just hearing and visualizing the song gives me the chills in my head as our proud naval servicemen defend our country.

For senior Michael Ospina of Burroughs High School, these are the words that he hopes one day will apply to him as a future student at Navy.

Recently, Ospina returned home after visiting the Naval Academy in Annapolis, Maryland, for six days (May 31 – June 6). He was invited by the United States Naval Academy as part of a select group of 2,550 men and women from across the nation and abroad to attend the Naval Academy Summer Seminar program.

“It was a lot of fun. I learned a lot and met a lot of new people,” Ospina said. “Everyone was so nice. All the leaders led by example. I did some physical activity. It wasn’t too bad but it was a taste of what I will experience if I do go there.”

Ospina, 16, was selected to attend the U.S. Naval Academy’s accelerated leadership program for rising seniors. This is a USNA sponsored summer seminar that teaches prospective applicants about life at the Naval Academy, where academics, athletics and professional training are key elements in developing our nation’s future leaders.

During his time there, Ospina took academic and leadership sessions (eight 90-minute workshops such as information technology, naval architecture, mechanical engineering, oceanography, meteorology, etc.) and was also a part of seamanship and navigation classes aboard a Navy Yard Patrol Craft.

“I really pushed myself to my limits,” he said. “I didn’t know how far I could push myself. It did show us that your mind will give up before your body actually does.”

It was the experience of a lifetime for Ospina as he had the unique and special opportunity to examine the life of Midshipmen up close and personal.

It his dream and goal to be accepted into Navy and to attend school there in the fall of 2015. In addition, Ospina has the desire and fortitude to serve his country upon graduating from the Naval Academy.

As he approaches the fall at JBHS, Ospina has his sights set on a tremendous academic and athletic school year. Two of his top priorities are maintaining his cumulative 4.0 grade point average as well as excelling as a leader for the Indians’ football team.

“I feel like I have the leadership qualities being out here on the football team leading by example,” he said. “I hope to have a great season, keep my grades up and do my best.”

His success in the Burroughs’ football program began as a freshman when he was starting quarterback and earned team MVP honors. As a member of the JV squad the following year, Ospina was named the MVP Offensive Back.

Last year as a junior in his first season at the varsity level, Ospina rushed for 386 yards on 65 carries (5.94 yards per carry). This season he is competing to be the starting running back for an Indians’ program that has a rich tradition in its rushing attack.

The Midshipmen ranked No. 2 in the country this past college football season averaging 325.4 yards per game, second only to Auburn’s 328.3.

Ospina would fit in well at Navy as a student-athlete if he chose to play football.

Balancing the demands of a hectic athletic lifestyle and a commitment to high academic standards has put Ospina in the position of pursuing his lifelong dream of attending the Naval Academy.

“He’s one of those kids you want in your program,” Burroughs coach Keith Knoop said. “Michael is a good leader. He’s not afraid of talking to kids on the team about doing the right thing. Anytime you can get to the Academies in any way, shape or form, you’ve done something right. When you can get in, it’s pretty special.”

In 2013, he was selected to attend the National Student Leadership Conference focusing in Medicine and Healthcare, at American University, Washington D.C.

His experience at the Naval Academy Summer Seminar opened his eyes and reaffirmed his commitment to apply to Navy for admission. It also taught him a valuable life lesson that he has brought back to share with his Burroughs’ teammates.

“One thing I really took from it was, ‘If not me, then who?’” Ospina said. “I learned that if I’m not going to be the one that will do my hardest, then who will? I have to lead by example to have others follow me. It’s a really good way to live my life and especially out here on the football field.”

Let’s hope Michael is granted his wish and desire to attend the Naval Academy. Then he can sing the fight song regularly walking across the beautiful campus with his head high at one of America’s greatest college institutions.

“Hopefully everything goes well and I get accepted. It would mean a great deal to me and especially for my parents (Fabian and Darlene),” Ospina said. “One thing they always talk to me about is service for my community. I would be happy to be able to do that because I would be making my family and community proud.”