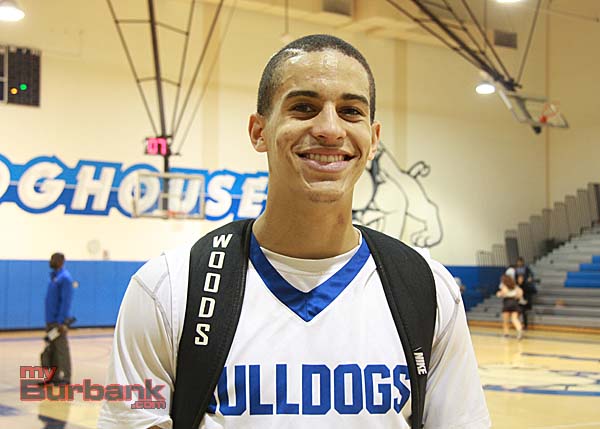 Keep an eye out for rising Burbank sophomore Mike Woods. The multi-talented guard started as a freshman a year ago for the Bulldogs boys’ basketball team and has improved tremendously in his second year at the high school level.

Recently, Woods was invited to an academic showcase in Orange County for projected college qualifiers. The two-day tournament was valuable for Woods as he soaked in the experience hosted by West Coast Elite Basketball at Cerritos College.

“It was great. I had a good time and I was happy for the chance to go,” Woods said. “They taught us what to expect in college and I learned a lot.”

“It was a big honor for him. He takes his academics very seriously and you can see it on the basketball court,” Burbank coach Jerry DeLaurie said. “He’s a very smart kid academically. He’s a true student-athlete. He’s what we want here at Burbank.”

Woods has evolved into one of the better players in the Pacific League. He currently averages 11.3 points per game, 8.5 rebounds per game, 2.0 blocks per game, 5.6 assists a game and 2.4 steals a game.

“Mike does so many things for us. He is a five-tool player,” DeLaurie said. “His shooting, ball-handling, rebounding, defense, passing, anticipation on steals. He does it all for us. He can play any position on the basketball court.”

Wood’s basketball savvy and IQ on the court compliments his discipline and commitment to excellence in the classroom. He maintains a 3.60 cumulative grade point average while handling the daily rigors of AP classes and playing basketball year-round.

“He is a solid student in the classroom and a phenomenal athlete on the basketball court,” DeLaurie said. “He is truly a pleasure to coach and to be around. It’s great seeing him have fun with his teammates and be successful with his basketball accomplishments on the court.

“People love an unselfish kid. He will do whatever it takes to help the team win. That’s what makes Mike special to me. Sometimes it won’t be about the points. He just wants the team to win. He’s more concerned about making the team better rather than himself. I love his attitude and he plays with confidence. I’m proud of him.”

The 6-foot-2 two-year varsity starter has quickly become the elder statesman on a team plentiful of juniors and sophomores. Woods leads by example with his consistent all-around play in every facet of the game.

“Mike is one of the best guards in the league. I really believe that,” said DeLaurie. “He will go down as the one of the best ever in this program. The future is going to be great with him.”

Wood’s love for basketball shines on the court every game and his future is as bright as they come.

“I would love to play anywhere in the country. That’s my goal,” Woods said about college in two years. “I think about it every night before I go to bed.”

It’s never too early to dream. Reality is just around the corner.