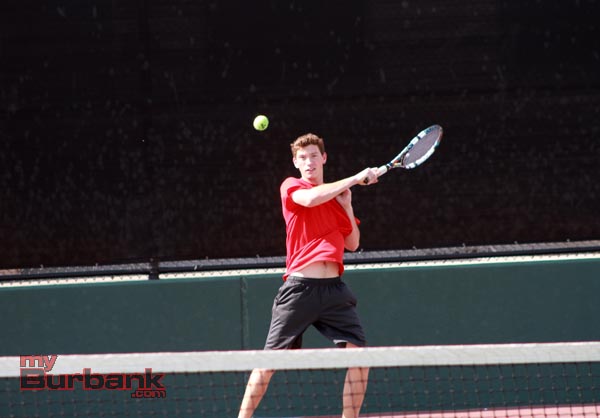 Burroughs’ Sawyer Patterson won all six of his sets in singles vs. Burbank this season 6-0 (Photo by Ross A. Benson)

Randy Higgens, Rory Roughtean and Cameron Briggs combined on the mound to shutdown the Mustangs. The Bulldogs were led by Chandler Robbins who had two hits.

The Indians squandered a 3-0 lead in the 6th inning and lost in the bottom of the 8th inning to the Tornadoes on a walk-off squeeze bunt. Max Haddad had two hits, a double and two RBI’s. Thomas Wilson had the only other hit for JBHS. Cole Meyer went six innings and gave up four hits, two earned runs while striking out nine.

The Bulldogs upset first-place Pasadena behind a strong effort from pitcher Ryan Porras. The southpaw threw five innings allowing only two hits, no runs, two walks and struck out nine. He also added two hits as Burbank rolled up seven on the day. Cameron Briggs had two hits and recorded the save. Reece Loock singled in Porras in the second inning for the game’s only run.

The Indians were shutout as they produced only four hits. The Falcons broke open a 3-0 lead with a four-run outburst in the sixth inning.

The Bulldogs scored 10 runs in the first inning en route to the easy victory. Hannah Moulton threw a no-hitter allowing only two walks and striking out seven. She also went 3 for 3 at the plate with a double and two RBI’s. Sabrina Steward was 2 for 3 with five RBI’s and three runs scored. Lily Winn had three RBI’s and a double and Julia Duarte added two hits and two RBI’s.

Naelyse Garcia and Danielle Ryan combined on a one-hitter as the Indians coasted to victory after taking a 11-0 lead in the first two innings. Michelle Santiago and Cheyenne Steward each had a home run and two RBI’s. Sidney Ortega went 3 for 4 with three runs scored and a double. Kaitlin Okimoto and DJ Santos added two RBI’s apiece.

Lily Winn helped pace the Bulldog attack going 3 for 5 with two doubles, two runs scored and contributed three fine defensive plays in the field. Caitlyn Brooks went 4 for 5 with five RBI’s and Amber Ingram went 3 for 4 with three runs scored. Hannah Moulton earned the win in the circle tossing five innings giving up five hits, three earned runs with four strikeouts. Six Bulldogs had two RBI’s or more as they piled up 18 hits in the victory.

Indians win their fifth consecutive league title. They are now 17-4 overall and 11-0 in league. 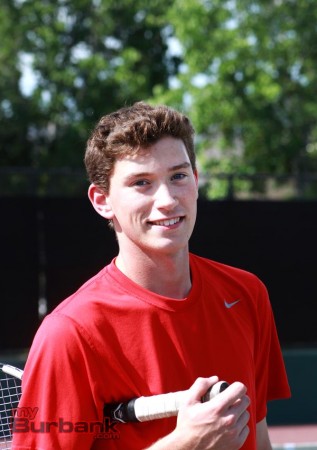 The Indians swept all nine doubles sets and Sawyer Patterson won all three of his singles play 6-0, 6-0, 6-0. Burroughs won both matches against Burbank this year and earn two points in the “myBurbank CUP” standings.

Sawyer Patterson and Burroughs swept Burbank this season (Photo by Ross A. Benson)

Pacific League match #4 (Burroughs took second with a score of 413; Burbank finished fourth with a 444).  Indians gain a point in the “myBurbank CUP” standings.