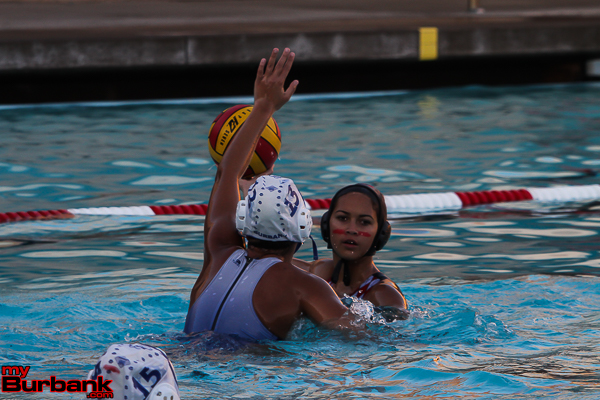 The Indians won the crosstown match, 10-5, over the Bulldogs (Photo by Ross A. Benson)

“The girls came out hard from the beginning and were motivated to come home with the win for our first league game,” Burroughs coach Jacob Cook said. “It was especially important because it was our rivalry game against Burbank High School. I couldn’t be happier with the team.”

Mike Woods scored 15 for the Bulldogs.

The Indians got a nice road win behind the efforts of Angelo Solis (15 points including 10 in the 4th quarter and 11 rebounds), Steven Hubbell (15 pts and 4 assists), David Schwer (15 points, 6 rebounds, 5 assists), and Jakob Davis (13 points and 6 rebounds).

The Indians bounced back from a two game losing streak with a dominant performance against the Falcons. David Schwer scored 21 points; Steven Hubbell had 14 points, 4 rebounds and 4 assists; Angelo Solis added 13 points and 12 rebounds and Chris Hovasapian had 11 points, 5 rebounds and 4 steals.

Tied at 29 with 2:59 left in the third quarter, the Mustangs went on a 9-0 run to end the period and capture the league victory.

Ellie Hanno scored 17 points while Mike Woods and Ben Chavez each added 12 points apiece as the Bulldogs won their opening game in league.

Jakob Davis scored 17 points and grabbed 11 rebounds; Steven Hubbell added 14 points, 5 rebounds and 4 assists and Chris Hovasapian had 12 for the Indians in the double overtime loss.

The Bulldogs finished the game on a 7-0 run to snatch the victory away from the Indians. Steven Hubbell led JBHS with 15 points, David Schwer added 14 and Chris Hovasapian and Jakob Davis each had 8 points.

Ana Tsybaeva scored 20 points and grabbed 13 rebounds for the Bulldogs.

The Indians survived another scare to win their 14th game in a row. The No. 3 ranked team in CIF Div. 1-A were led by Davina Del Castillo who scored 11 of her 12 points in the second half to go along with 6 rebounds and 4 steals. Sienna Brown had a big evening with 11 points and 12 rebounds. Chloe Takeuchi and Brooke Radcliff each had 9 points. Delaney Nicol had 6 points and 4 rebounds and knocked down two crucial free throws to ice the game with the Indians up 51-49 with one second left.

Davina Del Castillo scored 15 points and made four crucial free throws late in regulation to force overtime for the Indians. Del Castillo had a monster game with 15 rebounds, 6 steals and 5 assists. Abbey Ibarra had 9 points, 6 rebounds and 4 steals. Delaney Nicol had two game changing steals and 4 points in overtime. JBHS has won 12 consecutive games and 17 straight in league dating back to last season.

Ana Tsybaeva scored 15 points and grabbed 7 rebounds; Ani Temurian had 11 points and 8 steals as the Bulldogs coasted to an easy win.

Yazzy Sa’dullah scored 13 points to go along with 8 rebounds in the loss.

David Campos scored the lone goal for the Indians

Omar Ibnoujala scored the winning goal for the Bulldogs

Andres Aguilar scored the winning goal for the Indians with 22 minutes left in the contest.

With all three captains out and several other starters down with the flu, eight JV and Soph/Frosh players played the majority of the game as the Indians controlled possession and dictated play. Senior defender Jaymie Olea was the player of the game scoring her first ever varsity goal and adding an assist. JBHS goes to 3-2 in league having allowed only three goals in its last five games.

For the second straight time, JBHS came up a goal short against Arcadia. Like last season it was a set piece, this time on a long throw in that led to the only goal of the game midway through the second half. The Indians had a couple great chances, the best coming on a Brianna Castillo corner headed just outside the far post by Kristin Masuzumi. Sophomore Bella Nava was the JBHS player of the game at outside back.

Both goals came in the second half, the first by junior Camila Franco and the second by junior Daisy Castaneda. The defense was lead by senior captain Kristin Masuzumi and sophomore Delila Varela. Emily Orsatt recorded her second shutout as a varsity keeper.

Anna Kasper scored the lone goal for the Indians.

On the backs of a strong performance on defense led by senior captain Kristin Masuzumi and sophomore Delilah Varela, Burroughs had its first shutout of the season. The lone goal came on a breakaway from junior Camila Franco on a pass Brianna Castillo. JBHS didn’t make the most of numerous chances that included six corner kicks and several chances in the box that would have put the game out of reach.