This morning, at 10:40 a.m., residents called the Burbank Animal Shelter stating there were two small “bobcats,” hiding under a vehicle, in the 600 block of E. Orange Grove Ave.

Animal Control Officers responded, recovered the cubs, and transported them to the Burbank Animal Shelter. While examining the small cubs at the shelter, it was discovered that the animals were, in fact, mountain lion cubs and not bobcats as originally reported.

The cubs were badly malnourished and it appeared they had not been fed by their mother in a few weeks.

A Department of Fish and Game warden took possession of the mountain lion cubs and transported them to the Wildlife Station in Calabasas. The cubs were placed with another litter, in the hopes of improving their health.

At this time, it is unknown if the mother lion will return to the area for her cubs.

There were reports that some residents were attempting to strike the cubs with brooms. As a reminder, we strongly encourage all residents to never approach a mountain lion, remain clear of the area, and contact the Animal Shelter or Police Department if any wildlife is seen in the community. 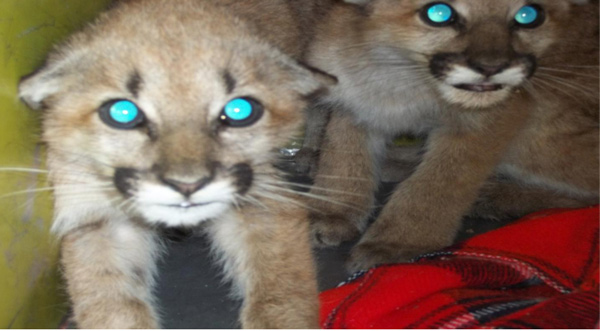 These two Mountain Lion Cubs were found near Orange Gove and Sixth St. in Burbank. There is no sign of the mother. (Photo Courtesy of Burbank Animal Shelter)