Burbank’s quest for the Pacific League title has been temporarily derailed. In a highly anticipated matchup between two undefeated teams in league, Muir took the inside track to its first league title since 2008 with a 24-17 victory against the Bulldogs.

The Mustangs quick and suffocating defense shook off an early 75-yard touchdown pass to shut down a Bulldogs offense that came in averaging 40 points per game in league play. 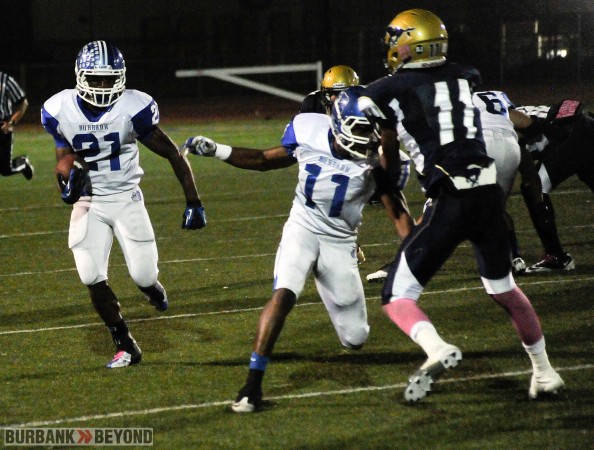 “That was one of the best defensive performances from a team that we have faced,” Burbank Coach Hector Valencia said. “They made us work on every single drive. My hats off to them. They really came out and played well. They deserve the win.”

The Bulldogs grinded away each offensive possession but ultimately had no answer for a Mustang defense that has now allowed only 31 points total through the first five league games.

“They have an outstanding defense,” Valencia said.

What came next caught everyone in the stadium by surprise, especially Muir’s defense.

Knowing Muir would put eight players in the box to stop its ground game, Burbank (5-3, 4-1) went deep on the first play from scrimmage and hit the jackpot.

Wide receiver Francis Nicks ran a picture perfect post pattern and hauled in a 75-yard touchdown pass from Ryan Meredith to give Burbank a 7-3 lead. Little did anyone realize at the time but it would be Burbank’s only points the rest of the half.

The Mustangs tacked on a touchdown late in the first quarter after a seven play, 75-yard drive to regain the lead. After forcing a BHS punt, Muir drove 54 yards to paydirt to make it 17-7 with 8:43 remaining in the first half.

The rest of the half was all Muir but fortunate for Burbank, the Mustangs had two more touchdowns negated because of penalties. A potential 31-7 halftime deficit for the Bulldogs remained at only 10 points. 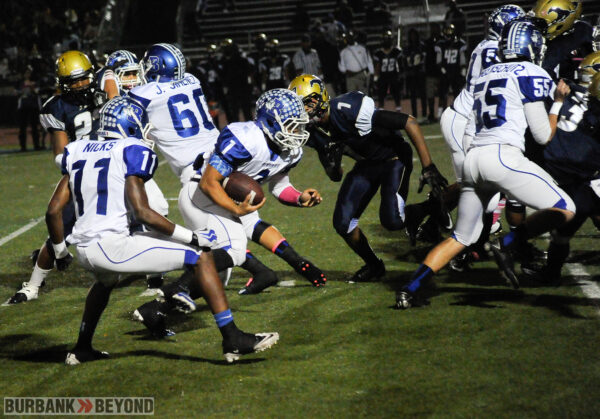 After a brief skirmish by both teams in the end zone prior to the second half kickoff (no physical contact, just a lot of trash talking), Burbank took the opening drive and scored when Joseph Pendleton converted runs of 46 and two yards for the score. Trailing only 17-14, the Bulldogs had gained much needed energy and confidence.

But similar to the first half, the Muir defense buckled down the rest of the way allowing only a late Burbank field goal. The Mustangs clinched the win with a 59-yard touchdown pass with 7:05 remaining in the game that gave them a 24-14 advantage.

James Williams led Burbank with 112 yards on 15 carries including 97 yards in the second half. Pendleton gained 69 yards on the ground as well.

Meredith finished five of nine for 112 yards, 75 of which came on the first play from scrimmage.

Burbank must defeat Glendale on Thursday and Burroughs the following week to still have a shot for its first league title since 2009. They will also need help from one of Muir’s next two opponents, Arcadia and Pasadena.

In this day in age, anything is possible in high school football. While Burbank still has aspirations of a league title, they better check their rear view mirror. Arcadia (4-1) and Burroughs (3-2) are coming on strong as the teams compete for the Pacific League’s two automatic postseason berths.