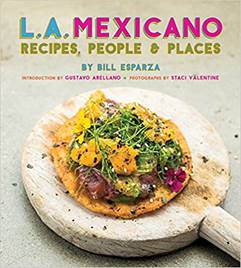 A recipient of a James Beard award for his coverage of the L.A. taco scene in Los Angeles Magazine, Esparza is considered one of the country’s leading experts on Mexican food.

In addition to hosting the annual Tacolandia festival in Los Angeles, he also appears regularly on CNN and KCRW’s radio show Good Food.

Last weekend, he was a featured speaker at the Los Angeles Times Festival of Books.