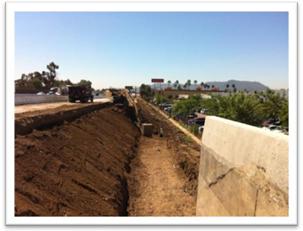 Major Construction Activities for the Week of August 10-15, 2014

§  Excavation for a retaining wall near the southbound I-5 Buena Vista Street off-ramp. (See photo at left.)

§  Excavation for a retaining wall north of the southbound I-5 Burbank Boulevard off-ramp.

§  Excavation for the new southbound I-5 Empire Avenue off-ramp. (Work will occur between the railroad tracks and southbound I-5.)

§  Construction of a boring pit at Victory Place and Wilson Avenue.

§  Manhole work at Victory Place and Empire Center Drive (the signaled intersection near Wendy’s and Catherine’s).

Please be attentive to closures, slow down, and watch for workers in construction zones.

What to Expect: Residents and businesses close to the freeway may notice vibration and construction noise, but it will not exceed levels permitted by state, federal and local regulations. Also, the contractor is using approved dust-control measures to minimize airborne particles, but some dust is expected. Additionally, motorists should be attentive to new traffic patterns created by restriping of travel lanes and concrete barriers. Please proceed cautiously and watch for workers.