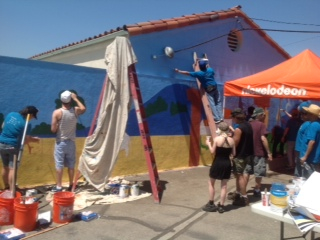 “Students were thrilled and filled with excitement. Teachers brought students out to watch the artists at work,” said Emerson Principal Linda Acuff. “Many returned to their rooms to make thank you cards for the gift of Nickelodeon.”

“The project enhances the dreary pick-up waiting area at Kenneth and Cypress,” continued Acuff. “It adds a vibrancy to the once desolate, dilapidated gate. Our neighbors should be impressed.” 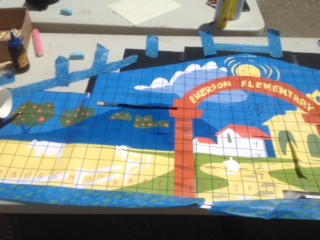 In temperatures over 100 degrees, with smoke from nearby fires in the air, the team from Nickelodeon worked through the day.

“I think we went through about 12 large bags of ice that day, cases and cases of water, ice cream and Popsicles.” 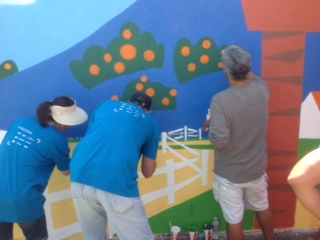 At one point, the entire third grade visited the work site and serenaded the volunteers with Nickelodeon theme songs.

“Viacommunity Day is a Viacom global initiative that allows its employees to take the day off and give back to the communities they work in,” commented Carson Smith, Human Resources Manager at Nickelodeon. 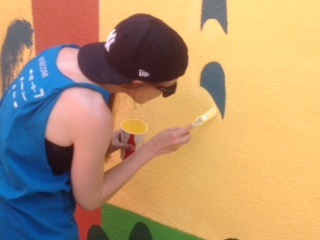 “We are proud to be a part of the Burbank locale, so for this year’s event, Nickelodeon Animation Studio and its talented artists teamed up with the local students to decorate a corner of their school,” explained Smith.

“While the heat wave didn’t escape us, we truly had a great time and look forward to future projects with the community and its schools,” he also said.

“Our heartfelt thanks goes out to Carson and the ‘Dora’ team,” added Acuff. “Their vision has transformed a section of our school.” 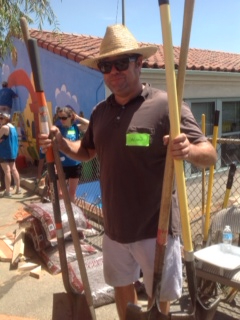 “They have created something from nothing,” commented Flynn. “They designed a mural that was in keeping with the beautiful period architecture of Emerson Elementary, replacing an unused and weathered marquee and transformed the surrounding space into an area that students, teachers, and parents will want to spend time.”

“I would not be surprised if the newly orange painted bike racks encourage more kids to ride bikes to school!”

“’Never underestimate the power of a few committed people to change the world. Indeed, it is the only thing that ever has,'” concluded Flynn. “This is the quote I have on replay in my mind every time we work with Nickelodeon.” 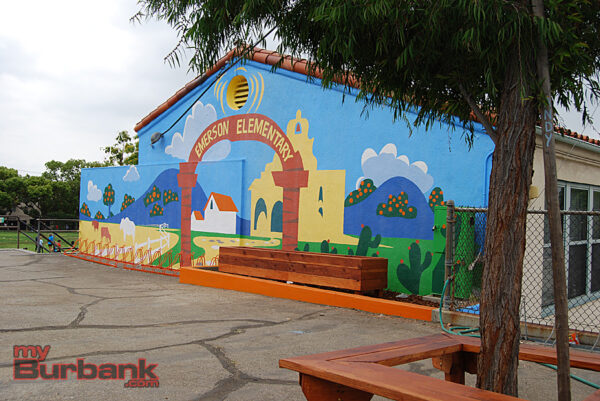