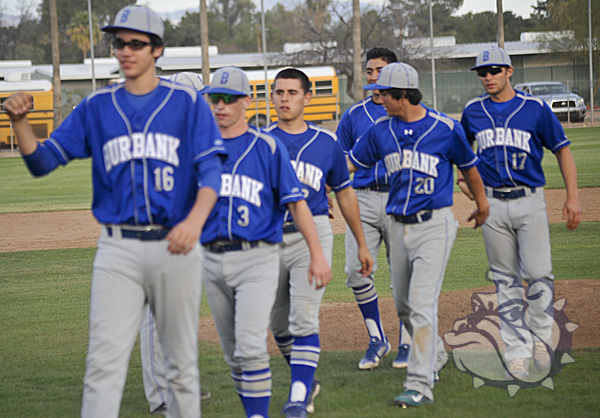 Burbank endured another tough loss on Friday as they gave up a 2-1 lead en route to a 5-2 loss to Foothills of Arizona.

Foothills scored one run in the bottom of the fourth to tie the game and three runs in the bottom of the fifth. Dylan Mersola and Ian McKinnon each had two hits for BHS. Martin Silva got the start and went 3 and 2/3 innings, giving up just two runs on four hits and coming out with the scored tied.

The Bulldogs (5-6) finished the tournament 2-3 and head back home to L.A. to continue play in the Pacific League on Friday at Glendale at 3:30 p.m.

Sahuaro rallied from a 3-2 deficit to score the tying run in the fifth and the winning run in the bottom of the seventh inning to stun the Bulldogs. Burbank (5-5) jumped out to a 2-0 advantage after two innings but couldn’t sustain the lead.

Harrison Hernandez went 2-for-3 with a single and triple; Angel Roman was 2-for-3 with two runs scored and John White finished the day 2-for-2. Shawn Troy threw five innings allowing three earned runs off seven hits.

A day after knocking off one of the top ranked teams in Southern Arizona, the Bulldogs rolled along and hammered Catalina, 21-1, in five innings on Wednesday. Burbank (5-4) had 17 hits led by Micah Simon who collected three hits and five RBI’s. Harrison Hernandez and Sam McKinnon also had three hits apiece with Hernandez driving in four runs.

Ryan Porras got the start for BHS and did an admirable job throwing five innings, allowing only four hits and striking out 10. Porras, a sophomore, was on target in his first varsity start as he nailed 18 first-pitch strikes out of 21 batters.

The Bulldogs scored five runs in the first inning, 10 in the third and six more in the fourth to force the mercy rule upon Catalina. Dylan Mersola, John White and Alan Villagran each contributed three RBI’s in the dominating victory.

With the win, Burbank won its pool (2-1) and earned the No. 5 seed in tournament bracket action. The Bulldogs will play No. 4 Sahuaro on Thursday at 4 p.m. Sahuaro possesses the top prospect in all of Southern Arizona, Alex Verdugo.

After a day of frustration, Burbank came together and played one of their best games of the season in defeating Ironwood Ridge, one of the top teams in Arizona. Ironwood Ridge came into the game undefeated at 11-0 and averaging 16 runs per contest. Not for long. The Bulldogs made it clear that this was their day.

Joey Bogenschutz (2-0) got the start and ran into some control problems in the first inning winding up with the bases loaded and one out and the Ironwood Ridge team smelling blood in the water. A ground ball to John White started a 5U-3 double play and turned the Nighthawks away without scoring. It was one of three double plays (including a game ender) that the Bulldogs turned on the day.

Bogenschutz ran into trouble only one more time in his five innings pitched and worked out of the jam when the score became tied at three all. On the day the senior righthander threw 86 pitches, allowed seven hits while striking out two, walked two, and gave up just two earned runs against a good hitting team. He came out leading 4-3 and Angel Villagran came in to finish it up and earn his first save of the season.

On offense, Angel Roman had a great day. The left fielder had two doubles and a triple while scoring one run and knocking one in and the only player with multiple hits in the eight collected by Burbank.

Harrison Hernandez also had a booming triple and Dylan Mersola doubled.  Ian McKinnon, John White and Villagran also had hits in the game.

The Bulldogs (4-4) proved that they are a quality team and will continue to do well as long as they follow the plan and path layed before them.

Sometimes you have to chalk it up to just one of those days. And so it went for the Bulldogs as they lost the opening game of the Arizona tournament 11-10 to Cienega in a seven inning battle.

After quickly falling behind 4-0, Burbank battled its way back to make the score 4-3.  After that point it seemed whenever the Bulldogs would start to get close, they would fall behind again by three or four runs until time ran out at the end.

Burbank collected only eight hits to score its 10 runs, but were helped by five walks, three hit batters and three errors to account for its scoring.

Angel Villagran continued his hot hitting as he was the only one to collect multiple hits with two singles. He also scored two runs while knocking in an RBI.  Dylan Mersola and Hector Rodriguez picked up the only extra base hits as both players lashed doubles.

Camden Palmisano came into the game after second baseman Chris Okimoto sustained an injury to his right cheek area trying to flag down a throw.  Okimoto remains listed as day to day. Palmisano finished the day 1 for 1 with two RBI’s and had two fantastic sacrifice bunts.

For the Bulldogs to be successful, they will have to cut down on both base running mistakes as well as defensive lapses as they committed four errors and ran into numerous unforced outs on the bases while trailing.

Sunnyslope junior Calvin Lebrun went the distance giving up four hits, striking out 10 and only walking one in seven innings of work. He also had two hits and a run scored.

Junior Cameron Rodriguez got the nod for Burroughs and threw six innings scattering 9 hits and gave up four runs, three of which were earned.

Senior Patrick Christopher continued his hot streak in the loss, going 2-3 at the plate. Rodriguez had a sac-fly in the first inning for Burroughs’ only RBI of the game.

The Burroughs Indians escaped with a win in the opening game of the “Best of the West Spring Classic” against Stillwater, Oklahoma.

Senior Luis Pereyra threw four innings of no-hit baseball while striking out seven and left the game with a 5-run lead.

The Indians made multiple mistakes on defense and gave up five runs in the 6th and the 7th innings.

However, the defensive highlights for the Indians came when they needed them most, as junior Cameron Rodriguez threw out the potential winning run at the plate in the bottom of the seventh and Pereyra made a diving play to his right right on the third base foul line to make the final out of the seventh with the winning run on third.

Senior Patrick Christopher played hero for Burroughs in the top of the eighth with a two-out, two-strike double off the wall that scored Rodriguez from second.

Senior Brandon Ortega shut down Stillwater in the bottom of the 8th 1-2-3 to notch the win. Ortega also had three hits and an RBI on the day.

Junior Anthony Robles went 2-2 in his first two at bats of the season.