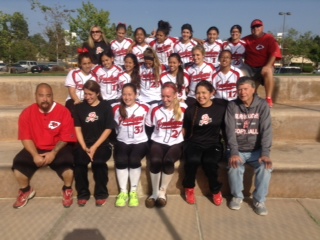 Burroughs won the “Duds by Dudes” tourney in La Jolla by winning all four of its games and not allowing a single run.  After star pitcher Brice Edrington was injured in an automobile accident last week, the Indians came together and played inspired softball.

“I am very proud of the girls.  We have faced a lot of adversity this season and the girls have continued to believe and persevered in tough circumstances.  This weekend was no different,” Burroughs Coach Doug Nicol said. “Brice is our leader in so many ways, both on and off the field.  When she got in her accident just a few days before leaving for the tournament, the team could have felt sorry for themselves.  But they aren’t like that.  They continued to fight and work together and I am so happy for them that they did so well, in light of all the obstacles put in our way.

“We are so young, but our girls have a great spirit and work ethic which enables them to fight through tough situations.  We have a lot of pride, and that came through this weekend.  It was a true team effort where everyone contributed.  I could not be happier.”

The Indians could only muster three hits on the day (Michelle Santiago, Delaney Nicol, and Sidney Ortega each had singles), but had numerous opportunities to score as they also drew three walks.  In the 8th inning and with Santiago on second base, Nicol laid down a sacrifice bunt that was bobbled by the LJCD third baseman which allowed Nicol to beat the throw to first.

With runners on first and third, freshman shortstop Kaitlin Okimoto hit a fielders choice to third base that scored Santiago for the games only run.  Steward closed out the game in the bottom of the 8th inning to seal the deal.

Burroughs received fine defense behind Steward, specifically from sophomore outfielder Dominique Santos, who made a great catch in the left centerfield gap in the bottom of the 7th inning, and then quickly threw the ball to second base to turn a double play that saved the game.

Burroughs did not allow a run in the tournament, and Steward has pitched 26 consecutive scoreless innings.  The performance by the Indians is even more impressive when you consider that they were playing without senior pitcher/captain Brice Edrington, who is out for a few weeks after being involved in a car accident last week, and also having lost sophomore infielder Kailanie Oasay for the entire season with an injured shoulder.  Impressively, younger players are stepping in and seizing the opportunity and the Indians are truly playing as a team in their quest for a fourth consecutive Pacific League title.

The Indians are now 9-4 and will continue their Pacific League season on April 2 vs. Pasadena.

Burroughs once again displayed the pitching and defense that enabled them to start the tournament with three straight wins.  However, for the second game in a row the bats came alive and the Indians won 8-0 by mercy rule after five innings.  Burroughs pounded out 16 hits for the game, and scored early and often.  Cheyenne Steward threw her third consecutive shutout, while allowing one hit to lead the Indians in the circle.  Steward, Michelle Santiago, Delaney Nicol, Aimee Rodriguez, Sidney Ortega, and Lahela Bautista all had multi-hit games.

Burroughs had 16 hits in the game to take out Canyon Crest of San Diego.  Lahela Bautista had two hits, including a 3-run HR, which cleared the left field fence.  Bautista had five RBI’s in the game.  On the mound, Cheyenne Steward pitched a 5-hit shutout, while not walking a batter.

Burroughs starting pitcher Cheyenne Steward pitched a 1-hit shutout, while also allowing 4 walks to post the victory for the Indians in the first round of the “Duds for Dudes Torrey Invitational” in La Jolla, CA.  Steward got off to a slow start as she walked the bases loaded in the first inning.  However, she settled down and only allowed a single in the 6th inning to frustrate Monte Vista of San Diego.  Junior second baseman Aimee Rodriguez brought the big bat, getting two hits and scoring a run.

Lahela Bautista had the big hit of the game, as she tripled off the right field fence in the 3rd inning, which scored Rodriguez to give the Indians the only run they would need.  Senior captain and pitcher Brice Edrington did not play, and will probably sit out the tournament after being involved in a car accident on Sunday night in Burbank.  She is ok, but will probably be out for a few weeks as she recovers, and Steward will be counted on to log many of the innings as the team moves forward in the tournament.