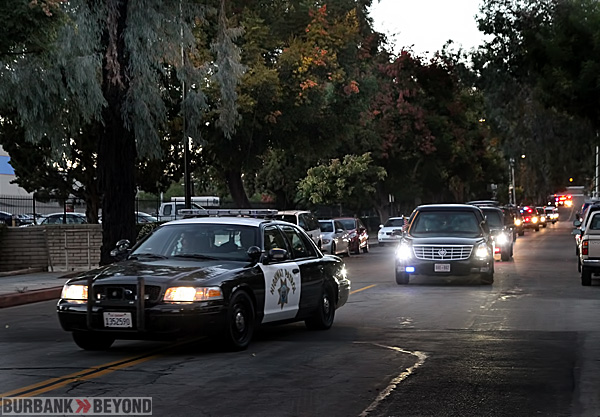 The Presidential motorcade is lead by California Highway Patrol with over 50 officers, with the assistance of several other agencies.(Photo by Ross A. Benson)

The President of The United States of America stopped in Burbank for the 5th time since his Presidency to make an appearance on The Tonight Show with Jay Leno.

The President arrived via Marine One at Bob Hope Airport and was escorted by Presidential Motorcade via Hollywood Way to Alameda, to Catalina Street then to Warner and into studio property.  The escort, led by California Highway Patrol and was assisted by several agencies including Alhambra Police, Pasadena Police, L.A. County Sheriff, and Burbank Police.

After taping the Tonight Show the President departed back to Bob Hope Airport  via the same route, boarded Marine One and was headed to LAX to fly to Las Vegas, for a concert and then off to Florida to continue campaigning.

There were reports of motorists being delayed  while attempting to get across town.  Police blocked access to streets in the area of NBC and the airport for security reasons.  One Burbank resident, who works in Woodland Hills, reported  on Facebook that he had to wait for about an hour after getting off the freeway at Pass Ave. and being blocked from crossing Hollywood Way to get to his home on Ontario St. south of Verdugo Ave.  Others reported similar delays in simply getting across Hollywood Way.

First Lady Michelle Obama is scheduled to be in Southern California on Thursday, October 25.  She will be attending a fundraiser at the home of actor Will Smith in Calabasas in the morning, and making an appearance on the Jimmy Kimmel Show that tapes in Hollywood in the afternoon.  It is not believed that she will be coming through Burbank. 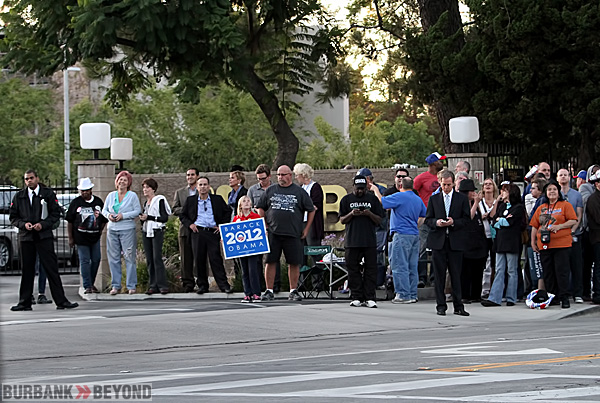 Obama supporters gather near the entrance to NBC at Parkside Dr.and Catalina awaiting the President’s arrival. (Photo by Ross A. Benson) 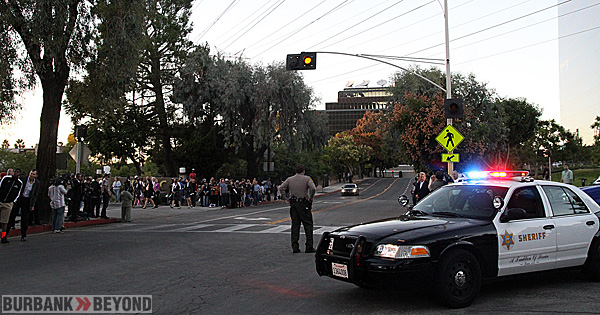 LA County Sheriff’s along with Police officers from Alhambra, Pasadena, and other agencies assisted Burbank Police with traffic and crowd control. (Photo by Ross A. Benson) 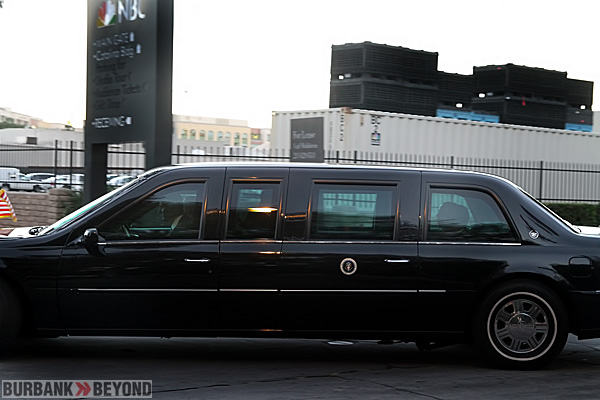 President Barack Obama seated in the backseat arrives at NBC Studios via the Warner Blvd. entrance. (Photo by Ross A. Benson)

Hands Across The Battlefield Help Pack Over 980 Boxes for Our Troops
Rizzotti Announces Intent to Run for Burbank Council Seat
Burbank's Float Jungle Rescue Ready for its Place on Colorado Blvd.
Burbank Holiday Baskets Program Gears Up For Holiday Cheer