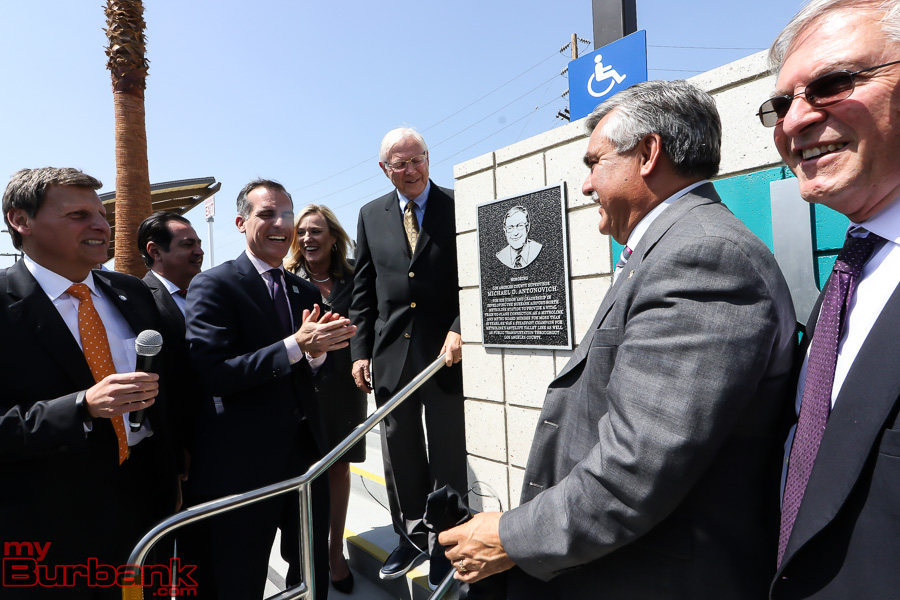 The station should help reduce vehicle trips on the I-5 freeway and roads in the many residential neighborhoods near the airport.  Air travelers will be able to seamlessly connect to and from the new station via a free shuttle operated by the Hollywood Burbank Airport. New station amenities will include rail ticket vending machines, benches, bike racks and LED display boards showing arrival and departure times for trains, buses, and planes. A pedestrian sidewalk and transit plaza will be built adjacent to the station platform and San Fernando Boulevard.

“More travelers are coming through our airports than ever before — and we’re giving them new ways to get where they’re going when the plane ride is over,” said Los Angeles Mayor and Metro Board Chair Eric Garcetti. “This new Metrolink connection will seamlessly link our transportation network with the Hollywood Burbank Airport — while easing congestion in one of our busiest corridors.”

Located on the northwestern corner of Hollywood Way and San Fernando Boulevard between the cities of Burbank and Los Angeles, the new station will also be within walking distance of the planned airport terminal facility that will replace the current terminal, as well as a future proposed mixed-use development.

“Metro and its partners are making good on their promise to improve connections with airports countywide including Burbank, one the nation’s most convenient airports,” said Supervisor Kathryn Barger, a Metro Board Member.

Metrolink’s Antelope Valley Line runs between Los Angeles Union Station, the Northeast San Fernando Valley, Santa Clarita, Palmdale and Lancaster seven days a week. The station is the second to serve Hollywood Burbank Airport. Metrolink’s Ventura County Line also provides a station stop on the other side of the airport with train service on weekdays only.

“The City of Burbank is excited to have another transportation alternative for both our residents and employees who work and reside in our city,” stated Burbank Mayor Emily Gabel-Luddy.  “Additionally, the new station will act as an essential part of our future vision for the Airport/Golden State District.”

“With the opening of the Burbank Airport-North Metrolink Station, passengers from Lancaster to Los Angeles will now be able to connect to Hollywood Burbank Airport on the Antelope Valley Line,” said Burbank-Glendale-Pasadena Airport Authority President and Pasadena Mayor Terry Tornek. “We’re proud to be the only Southern California airport to offer plane-to-train connections at two train stations, including the existing Burbank Airport-South Station, which serves passengers from East Ventura to Union Station on Metrolink’s Ventura County Line and from San Luis Obispo to San Diego on Amtrak’s Pacific Surfliner.”

“Metro is glad to build and be a major funding partner for this new transit connection to the Hollywood Burbank Airport,” said Metro CEO Phillip A. Washington. “Metro’s transportation transformation will continue to deliver more and better options to many of our important regional destinations.”

“With the new Metrolink Burbank Airport-North Station, there is finally a daily connection to the Hollywood Burbank Airport on the Antelope Valley Line, one of our fastest growing lines,” said Metrolink CEO Art Leahy. “This new train to plane connection provides an opportunity for people to save time and money spent for parking by taking Metrolink instead.”

Construction of the new station began in March 2017. The project was built by C.A. Rasmussen, INC., of Valencia, California. The $15 million project was delivered on-time and under budget.