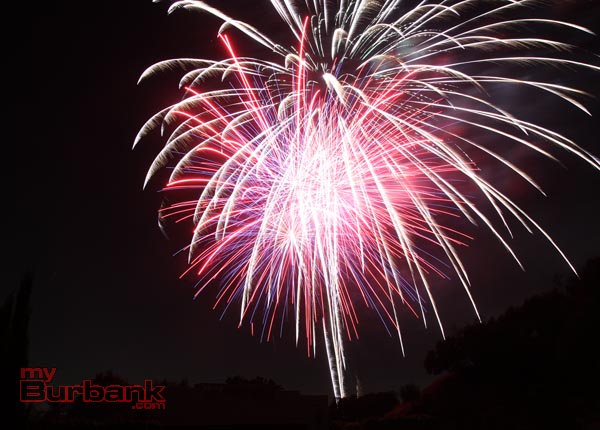 Anyone caught in possession of fireworks will have them confiscated and be subject to a citation or arrest.

Burbank Fire Chief Tom Lenahan said, “Fireworks, even those marked as ‘safe and sane,’ are ILLEGAL in the City of Burbank. Please make the holiday a safe one. Enjoy the amazing professional fireworks show put on by our Parks and Recreation Department at the Starlight Bowl.”

In recent years, fireworks have been one of the leading causes of injuries requiring hospital emergency room treatment. Fireworks can result in severe burns, fractures, scars and even death or disfigurement. Serious injuries each year typically harm the eyes, head or hands.

Additionally, Burbank Police want to remind residents that celebratory gunfire is not only dangerous, but illegal. Shooting a gun into the air is a felony. If you are caught, you will be arrested and prosecuted.

A stray bullet from your gun can kill someone. If you see someone fire a gun into the air, call the police.

Finally, they want to remind the community that drone (UAS) operations are unlawful within the city limits under federal law with limited exceptions as well as the Burbank Municipal Code, which makes it illegal to operate drones near fireworks, police / fire operations, at night or over people, among several other restrictions.