St. Francis Xavier Catholic Church holds the annual Old Tyme Country Faire on June 6, 7 and 8 at the Scott Road church complex. Rides, food, crafts, raffles and fun for the whole family is planned for the first weekend in June.

The church has held an annual June carnival for the past 55 years. Initially called a “Bazaar,” the St. Francis Xavier carnival was first held on June 6 and 7, 1959, with food, games and a raffle with a first place prize of $1000. The first Bazaar ended up making over $11,000.

Since that very first Bazaar in 1959, St. Francis Xavier has continued to invite the Burbank community to decades of bazaars and fiestas. On May 31, 1991, the church held the first Old Tyme Country Faire. 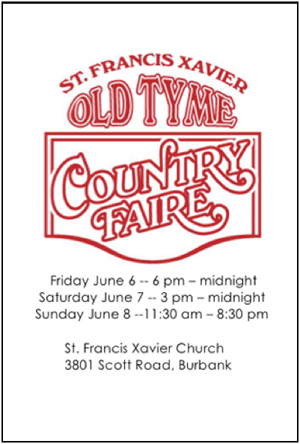 Although the name has changed, the mission to bring the Burbank community together has not, said church representatives.

At the June Faire of 1994, the church started a booth for testing blood to register Burbank residents in the national bone marrow registry.

Begun in memory of 11-year-old Gregory Smith and his success to rally the community together to find a compatible bone marrow donor, St. Francis Xavier regularly operates a booth at the Faire to continue the efforts started by Smith, his family and community.

With artisans and crafts, rides, games, food and treats galore, the Old Tyme Country Faire continues to be an annual event for all Burbank residents to enjoy.