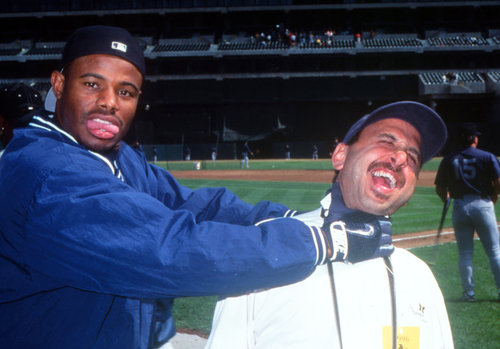 Anyone who collected baseball cards in the 1980s or 1990s may not know Mitchell Haddad personally.
But they almost certainly have owned a piece of his work, whether they know it or not.
Haddad, who is now 64 years old and is a 1974 Burroughs High grad, was once a key figure in producing baseball cards as was a photographer for card manufacturers Donruss and Fleer.
Having retired from baseball cards more than 15 years ago, Haddad said he feels grateful for the memories he has had.

“It blows me away what I pulled off over the past 40 years,” Haddad recalled. “I’ve been to every stadium through the card companies. I’ve been to nine All-Star games.”

Haddad said he started taking pictures in the Navy in the 1970s. Upon finishing his military service, Haddad got hired to work at a magazine. It was there that he got his start.

“I borrowed the art director’s press pass and I had it copied, put my name on it and used it to get down on the field by the ushers,” Haddad recalled. “Nobody knew anything back then. I always acted like I belong there. I embraced it without getting in trouble. I’m an ambitious person. I feel as long as nobody gets hurt, I’m going to make it happen.”

He then spoke with friend and fellow Burroughs grad Bill Livingston who had been shooting for Fleer. Livingston recommend that Haddad contact Donruss and the match was made.
“They hired me and said they would guarantee me so many images they would purchase for that season and it just escalated,” Haddad recalled. “I did the Dodgers and the Angels and I would occasionally go down to San Diego. “

Along the way, Haddad would strike up friendships with a number of baseball players as well as athletes in other sports as he also got to shoot other sports.
Haddad became close friends with Hall of Fame first baseman Rod Carew, as well as many others including former Dodgers Marquis Grissom, John Shelby and Luis Gonzalez, former Cincinnati Reds pitcher Ron Robinson and former Minnesota Twins catcher Dave Engle.
Haddad said he also spent lots of time with the late Hall of Famer Tony Gwynn and Don Baylor.
But Haddad admits that as much as it was fun to take pictures that became trading cards, he also enjoyed taking pictures that were not during the game and of the families of the players.

“I have pictures of (Craig) Biggio’s son (Cavan) whose is now playing for the Blue Jays rolling on the grass at Dodger Stadium,” Haddad said of the Hall of Fame Houston Astros second baseman. “ It is so fun to see that kind of thing.”
Haddad said he also photographed the young sons of former Dodger Raul Mondesi, Raul Jr. and Adalberto Mondesi. Adalberto now plays for the Kansas City Royals.

As much as Haddad loved his job, he said he came to point when he knew he had to stop.

“I would have to go to Spring Training for 40 days and not only was it hard on my wife, I didn’t want to be away from my kids,” Haddad said. “My children are way more important. I was also doing television at the time when I quit. I started doing TV in 1999, so I was shooting television during the week and shooting baseball games on the weekends or football or whatever.

I got down to Spring Training in 2004 in Tucson, Arizona and I drove there. I said to myself I don’t want to do this anymore.  I called Fleer that morning and said this is it for me. Twenty four years was good. It was the greatest job on the planet.  You got to hang out on the field and interact with the players and get to know them and become friends.  I’ve got a lot of Major League friends that I stay in touch with and Hall of Famers.”

Haddad’s son Miles and Max both played baseball at Burroughs High, graduating in 2013 and 2015, respectively. Miles went on to play baseball at the University of the Pacific and Max at Lewis and Clark College in Oregon.

For as much fun as Haddad had with sports, he admits it actually isn’t his favorite.

“I love music and if I had to choose between shooting sports or music, I’d choose music in a heartbeat, depending on who it is of course,” Haddad said. “But I loved doing sports. It was the greatest. To be on the field or inside the ropes and follow Tiger Woods.”

The list of the artists in the music industry Haddad has shot is also endless and includes Paul McCartney and Ringo Starr, the Rolling Stones, Elton John, Ray Charles and Frank Sinatra.

Haddad now spends most of his time in local studios. He worked on the ABC television series “Scandal” for seven years and now finds time working on “Truth Be Told”, a TV series produced for Apple TV.

More than four decades after he began, Haddad is still going strong and has many more pictures left to take.
“It’s not a job, it is a passion. I do it because I love it,” Haddad said. “I have two cameras in my car everywhere I go. For me I’d be (mad) if I didn’t bring my camera because I’d say dang that would be a nice shot.”

Many of Haddad’s photo are listed online on his web site at www.mitchellhaddadphoto.com.