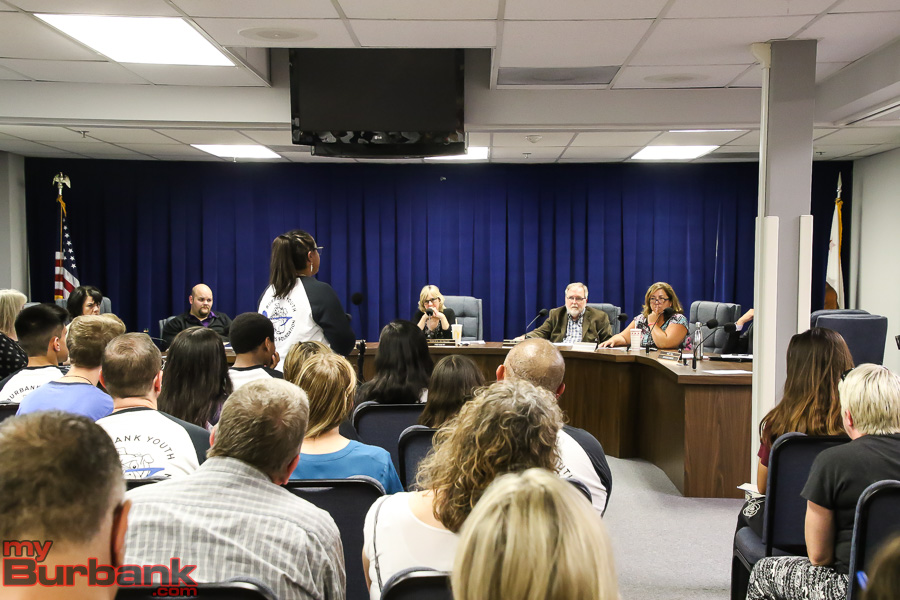 Editor’s Note: The following is an editorial authored by Greg Simay for myBurbank. We will be glad to publish letters to the editor from opposing opinions.

July 25 had a warm night.  But the political temperature was hotter inside Burbank Unified School District headquarters.  Discord loomed.

“I do have a gavel and I know how to use it,” declared BUSD Board President Dr. Roberta Reynolds She didn’t want a replay of the raucous Board meeting only days before, with strong feelings from a packed audience erupting into angry accusations and acrimony. But as Lorri Hubert, the newly elected chair of the Burbank Vocal Music Association, puts it, “Show choir in Burbank is like football in Texas.”  So any development that clouds the future of the show choir’s enrichment programs is stirring up a Texas-sized twister.

But the rancor was subdued.  The audience seemed to realize that doing right by the advanced show choirs was going to take some serious thinking.  And so the July 25 study session lived up to its description.

But the underlying problem will be with us for a while.

Enrichment programs include several in-state and one out-of-state show choir competitions.  Burbank High and Burroughs students have been so good they’ve collected a forest of top trophies, and Burbank High took first place nationally in 2017. In football terms, it would be like sending your varsity team to a high school version of the Super Bowl (if only), and they win it. The following spring, the team has so much depth they split into two teams and play against each other with pigskin perfection at Memorial Field, to our great delight.  The show choir equivalents are the Spring Pop Shows, featuring many of the same showstoppers that wowed the judges at the nationals.

Many of us know how life-changing it can be to struggle and strive as part of a team and to go on to win a major victory.  The show choir students at the school board meeting made it clear that being show choir is also a team, one that can offer its share of life-changing experiences.

Funding By Parents Is Crucial

The immediate issue was whether or not the Burbank High Vocal Music Association should separate from BUSD or remained joined to it, to best ensure that the enrichment programs receive adequate support from the parents.  At present, the Burroughs VMA has no need to consider separation.

A key point: BUSD does not have the kind of budget that can support Burbank VMA’s $600,000 enrichment program.  That kind of money must come from fundraising activities or from the parents.

Even with fundraising, parents must dig into their pockets and contribute several thousand dollars per student.  If enough parents don’t pay, the advanced show choirs will compete in fewer events, perhaps none at all.  And the annual Pop Show will suffer as well since it’s based largely on numbers that were prepared for the competitions.  Lately, there’s been an uptick of Burbank High VMA parents who, for one reason or another, were not paying.  And so the issue of funding is being raised now.

Neither Joining or Separating Can Overcome Lack of Parent Funding

Remaining under BUSD or separating from it carries important tradeoffs, but neither option can overcome a significant decline in contributions from the parents of the show choir students.

·       If Burbank VMA stays with BUSD, then enrichment program contributions are strictly voluntary as a matter of State law.  No one can be barred from participating by not making a voluntary contribution, or by not participating in a fundraising activity.  No one has to declare a financial hardship in order to avoid paying the fee.  Participation in an enrichment activity for a given group is to be 100%.  But what if the contributions or fundraising fall seriously short?  BUSD doesn’t have the budget to cover the shortfall, and Burbank VMA can’t cut back on the number of participants.  The only alternative would be to forego the out-of-state contest altogether or other program costs (i.e., costumes, coaches, etc.).

·       If Burbank VMA separates from BUSD, it can impose mandatory fees.  Parents pleading financial hardship would have to make a credible case to the VMA, revealing details that they may prefer to be kept strictly private.  Enforcing collection of the fee, though legally permissible, would be problematic.  Setting aside any effect on group morale, airline and hotel fees need to be paid in advance: it may well be the case that the only students to participate would be those whose parents paid the full fee in advance.  But fewer students competing may result in a less competitive team, making it less artistically creative and less successful.

Some in the audience expressed concern that the separation option would lead to “segregation by the green in your wallet.”  Others pointed out that parents in need have always been helped in the past.  The fundamental problem is that “there’s no such thing as a free lunch.”   If too many parents have their oars out of the water, the Burbank VMA boat goes nowhere.

The “lack of transparency” (i.e., not knowing how much money was collected and how it was spent) was identified as a reason for some parents withholding contributions.  A kick-off meeting and some e-mailed spreadsheets should readily answer that concern.

The Problem of Unexpected Success

We don’t fund public schools for the level of success that our high school show choirs at Burbank and Burroughs have achieved.   Most high schools have seen declining music budgets, and can barely put on a holiday program.  Give our own BUSD credit for holding on to its arts programs in the face of budget woes plaguing schools across California and the country.

But now we have show choirs that are number one in the nation, coached by some of the top choreographers in the business.  We have college-level performances in high school auditoriums that provide studio quality lighting and sound—with high school students operating the equipment.  We’re producing choir alumni that have gone on to serious Broadway and Hollywood careers.  We have studios snapping up the sound and lighting techs right after graduation.

Thanks to dedicated teachers and parents, and tremendous business community support, Burbank’s show choirs are at a level that you’d find at NYC’s High School of Performing Arts.  But that exception-to-the-rule school stretches back to 1947 and, to NYC’s eternal credit, is publicly funded for a world-class level of excellence.  BUSD’s arts ascendancy is more recent, though Burbank is home to leading media industries.  But BUSD hasn’t yet got the budgetary legs underneath it` that comes from the community making a settled, long-term decision to have a public high school that can be a launching pad for success by design, and in areas in addition to show choir.

Keep the Focus on the Students

What became apparent to us is the fragility of one of BUSD’s most successful programs.  Unless a huge majority of parents are willing to continue contributing several thousands of dollars a year or pounding the pavement to fundraise, the money simply won’t be there for the advanced show choirs to perform on a national stage. Separation or no separation.  By the way, the students actually enjoy fundraising, seeing it as a team effort.

Perhaps this is a case where the parents can take their cue from the camaraderie of that their sons and daughters have achieved with each other.  If you’re one of the parents who moved their family a thousand miles to Burbank because of the show choir program, you don’t want petty politics and squabbling to scuttle the enrichment programs.  If you’re the parent of a son or daughter that really does have a shot at a serious entertainment career, you don’t want their visibility derailed by unserious adult behavior.

School Board members, please please remove any unnecessary obstacles.  State law is problematic enough; please don’t add local complications.  At the start of your July 25 meeting, the choir group Burbank Sing delivered an impressive a cappella version of  “Stand Up and Make a Change.”

Let that be your anthem as well.  Let’s figure out how to make the show choir miracle a permanent BUSD brand so that other areas of excellence have a path to outstanding success as well.

So that one day, parents relocate to Burbank because of its writing program, or its science program, or because their children can hit the ground running at 18 as confident and competent adults.