The Burbank- Magnolia Park Optimist Club honored three people from the Burbank Police Department at their annual awards dinner last Thursday, January 16, at the Elks Lodge. Police Officer of the Year Christian Diaz, Civilian Employee of the Year Norma Brolsma and Volunteer of the Year Linda Troncone were recognized at the event attended by over 50 Optimist Club members and several members of BPD Command Staff and the Burbank Police Officers’ Association (BPOA) and family members of the award recipients. 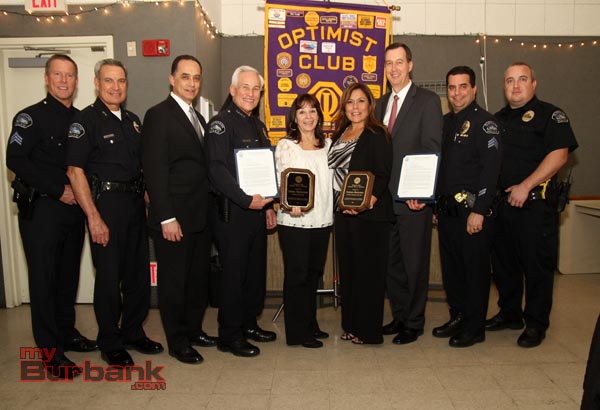 “The Burbank Police Department is extremely proud of the dedication, accomplishments, teamwork, and positive attitudes of Officer Diaz, Ms. Brolsma, and Ms. Troncone,” commented Police Chief Scott LaChasse. “They are the heart and soul of the police department and each has contributed significantly to our success in providing quality service and having achieved a reputation of overall excellence.”

Brolsma has worked for the BPD since 1981 and for the past twenty years has worked in the Traffic Bureau processing film permits, parade permits and special event permits. She also acts as the liason between the film industry and the police department for special events like Cavalia, Circus Vargas and the Downtown Burbank car shows. 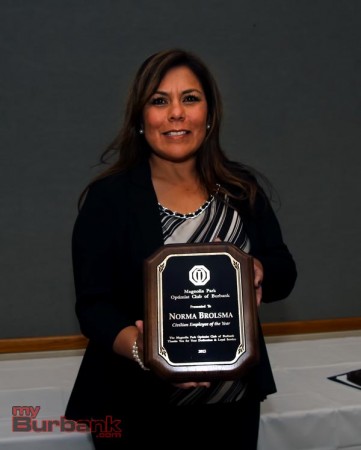 Born and raised in Burbank, Brolsma attended Burbank High School and Valley College and currently resides in the city with her fiance Brian and son Donald.

She has been the recipient of several commendations over the years for cultural awareness projects and for her part in the police department’s work combating domestic terrorism.

“It is an honor to be named 2014 Civilian Employee of the Year. I want to thank the Magnolia Park Optimist Club and the Burbank Police Department for the recognition and award,” Brolsma said.

“It’s been a honor serving the City of Burbank for 33.5 years at the Police Department.”

Troncone has volunteered with the Burbank PD since 2005 on a variety of projects in addition to assisting the detectives in the department’s Juvenile Division. She also volunteers with the BPOA assisting with their retirement gala, holiday party and golf tournament. She volunteers for the City of Burbank’s Habitat For Humanity team and also lends a hand to LAPD’s Devonshire Division. 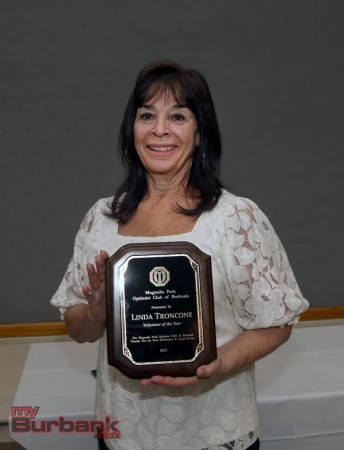 After living in Burbank for many years, Troncone recently moved to Granada Hills. She enjoys spending time with her two granddaughters, Mia and Ali and baking.

“It is an honor being recognized by the Optimist Club for something that I truly love doing, which is helping the police department,” commented Troncone.

Police Officer of the Year Christian Diaz was unable to attend the awards event as he was at a week-long Field Training Officer school out of the area, according to Sgt. Darin Ryburn of the Burbank Police Department. He added, “He wanted to thank the Optimist Club for their award and apologized for not being there in person to accept the award.”

Sgt. Claudio Losacco, President of the BPOA, accepted the award on Diaz’ behalf. Diaz was also recently honored as Police Officer of the Year at the Elks Service Awards event, which recognized four individuals in the City of Burbank for outstanding work.

The Optimist Club awards event honoring members of the Burbank Police Department has been held annually for more than 40 years, beginning in the 1960s when both the Fire Chief and Chief of Police were members of the club, according to club member Jim Lloyd.

“While most of the activities we do are geared towards the youth in Burbank this awards dinner is something we’ve enjoyed doing for the Burbank Police Department,” explained Terry Scott, a former BUSD Physical Education teacher who, along with his wife Pam, has been an Optimist Club member for several years. “We like to put on this night for them and we all had a great time.”

The Burbank-Magnolia Park Optimist Club was chartered in 1954 and many past and present educators fill out its membership ranks. The Optimist Club’s main fundraiser is their annual golf tournament held each May, which raises money for scholarships awarded to graduating high school seniors.