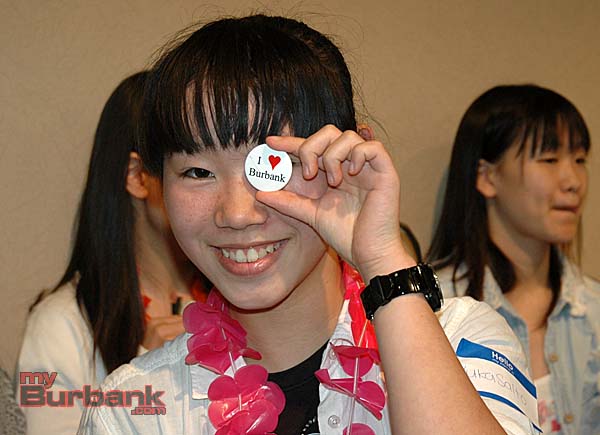 Buena Vista Library auditorium was a hub of excitement on Tuesday afternoon.

A bus had just dropped off 12 students and two chaperones visiting from Ota, Japan as part of the Sister City student exchange program.

Doug Grimshaw, president of the Burbank Sister City Committee, greeted the guests and told them they would be spending the next two weeks meeting people from diverse cultures, touring TV and film studios, learning about the history of Burbank and Southern California and seeing a Dodger game and Disneyland.

“Many people here in Burbank, especially your host families, are happy that you are here and are very excited to meet you,” he said.

The delegation was welcomed by Mayor Emily Gabel-Luddy, who had written half of her speech in Japanese to make the guests feel at home.

The mayor thanked the pioneers who started the friendship with Ota more than 30 years ago, and the members who have kept the program going, especially the host families that have opened their homes to the guests.

“Each month members of the Sister City program come together in a genuine effort to learn from one another and build bridges of peace for future generations,” she said.

The mayor was joined by council members Jess Talamantes and Bob Frutos in presenting centennial souvenir tote bags filled with mementos including I Love Burbank lapel buttons. So charmed by the button, guest student Yuka Saito held it up in front of one eye when a photographer snapped her picture.

Sharon Cohen, library services director and committee liaison, invited the contingent to see a photograph of Burbank taken in 1932.

“It will give you a good idea of what Burbank looked like before all the tall buildings were constructed,” she said,

Each guest introduced themselves in English to the audience and told what they wanted to accomplish during their visit to Burbank.

One young girl said she wanted to make friends and learn “teenage English.”

The Burbank Sister City Committee has resumed its connection with another sister city this summer. A Burbank delegation just returned on July 18 after four weeks of visiting the sister city of Gaborone, Botswana. Dena Zelig, chairwoman of the Gaborone Sister City, was joined by Grimshaw and six other adults on the trip. Zelig and Grimshaw are teachers at Burbank High School. Over the last six years, students at Burbank High and Burroughs have been donating funds to a campaign to fight malaria.

The main reason for going was to present funds the group had raised to Gaborone officials leading an effort to purchase mosquito nets to help prevent malaria in the village of Molalatau. The delegation also brought $400 worth of toys donated by Burbank High School students. They also met with officials to spread the word about regenerating the Sister City program, Zelig said.

The Burbank group also took a workshop in Gaborone to learn about malaria, how it is transmitted, its effects and prevention, Grimshaw said.

Out of the six adults who went, five had actually participated as high school students in Ota, Japan trips with the Burbank Sister City exchange program in previous years, Zelig said.

“So they are longtime Sister city members and their families have been involved for years as well, so it was like a little family,” she added.