On Tuesday morning at around 8:25 a.m. Burbank Police units apprehended a 24 year old Sylmar resident, Joseph Lupercio, as the prime suspect in a “car-to-car” shooting that occurred on Monday evening near the intersection of Front Street and the Burbank Boulevard Overpass.

At a press conference held by Burbank Police on Tuesday, Sgt. Claudio Losacco, Burbank Police Department Public Information Officer explained Lupercio was identified at the scene by the victim as the shooter.

Burbank Police investigators located Lupercio’s vehicle, a black Mercedes Benz SUV, in the 13300 block of Beaver Street in Sylmar, putting the location under surveillance while search and arrest warrants were obtained.

On Tuesday morning Burbank Police SWAT officers, crisis negotiators, helicopter support, and K9s arrived on scene. Lupercio was contacted, however did not comply with orders to surrender. Lupercio then attempted to flee the scene, however was quickly taken into custody by Burbank Police officers with assistance from a Burbank Police K9 unit.

Lupercio is charged with attempted murder, with bail set at $2 million. 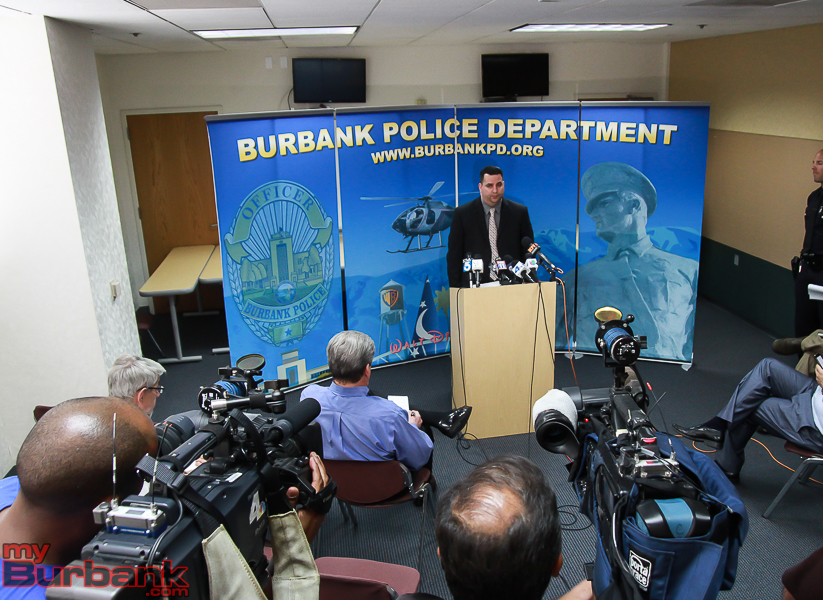 While the exact motives and events leading up to the shooting are still being investigated and sorted, Sgt. Losacco did indicate both the shooter and victim knew each other, and both have gang ties and pervious gang histories. In addition, each car had a passenger, both female, who played a role in the incident. Sarah Sullivan, 26, a Los Angeles resident, was also taken into custody as an accessory to attempted murder.

Sgt. Losacco noted the incident “may have been the result of conflict between the individuals, and not a random act.” He also emphasized this is not related to previous incidents in Burbank, such as the recent shooting in Lundigan Park, which was a suspected gang-related incident. Sgt. Locasso did note the location of the shooting “is a high traffic area,” and certainly a concern as a community perception of more frequent violent incidents in Burbank grows.

Sgt. Losacco explained the incident may have started near the intersection of San Fernando Boulevard and Burbank Boulevard, and carried over the Burbank Boulevard Overpass until the shooting occurred at the end of the overpass near Front Street. The victim then performed a “U Turn,” heading back across the bridge, stopping at the Wells Fargo Bank at San Fernando Boulevard where the victim changed places with a female, who drove the victim to the 1600 block of Grismer Avenue.

At that point the victim made an emergency call, and both police and fire department support quickly arrived, noting the victim had a gunshot wound to the upper chest. The victim is in good condition.

Both Lupercio and Sullivan are due to appear in the Burbank Branch of LA Superior Court on Thursday morning.

Anyone with information on this incident is asked to contact Burbank Police detectives at (818) 238-3210.