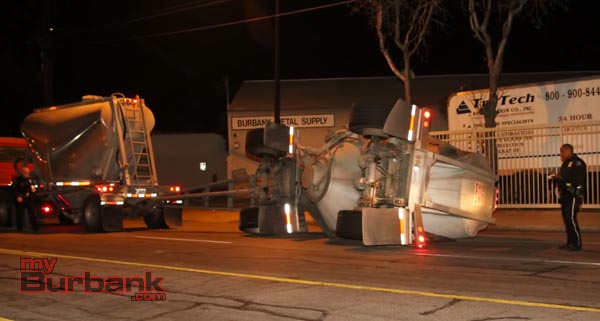 The Burbank Police & Fire Departments received calls of an overturned semi-truck on San Fernando Blvd and Ontario Street around 8:15 p.m. Saturday evening. Due to the nature of the call, the police dispatched units code 3 (lights & sirens) and the fire department dispatched a rescue response (an engine, truck company, paramedics and a Battalion Chief).

Engine 13 got on scene along with the police officers and found no one trapped or hurt, and the response was ultimately downgraded.

The truck driver told police that he had gotten lost off the I-5 freeway and attempted to make a ‘U’ turn when his trailer carrying dry cement shifted and the trailer rolled over.

Burbank police stood by for several hours until the proper type of heavy duty tow truck could arrive from Riverside where the trucking company was based from to upright it.

No injuries resulted from the accident, and Burbank police traffic will handle the investigation if needed.