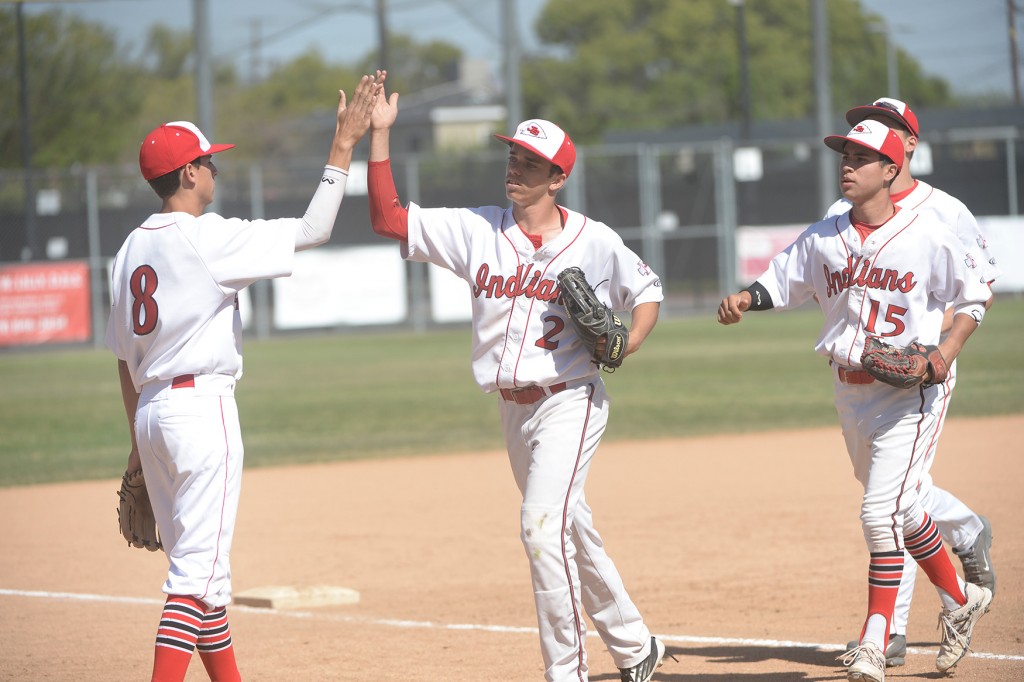 The Indians are in first place with big games coming up against Pasadena, Burbank and Crescenta Valley (Photo courtesy of Mitch Haddad)

For the first time in many, many, many years, both the Burroughs baseball and softball teams have a chance to be in first place at the same time when they meet their crosstown rivals next week. That hasn’t happened since….well, nobody really knows. But it’s great for the local Burbank community.

Seats will be at a premium and fans will be fired up for two excellent games between the Indians and Bulldogs. Burbank High will be hosting both clashes as softball takes to the field on Thursday evening and baseball follows suit on Friday night.

Here is what we do know as of today. The Indians haven’t won a league title in baseball since 1997. They are currently in first place with a 5-1 record and 15-4 overall having knocked off Arcadia, 9-0, and Crescenta Valley, 1-0, in recent games. A 5-3 loss to Pasadena is the lone strike on an otherwise tremendous start to league. 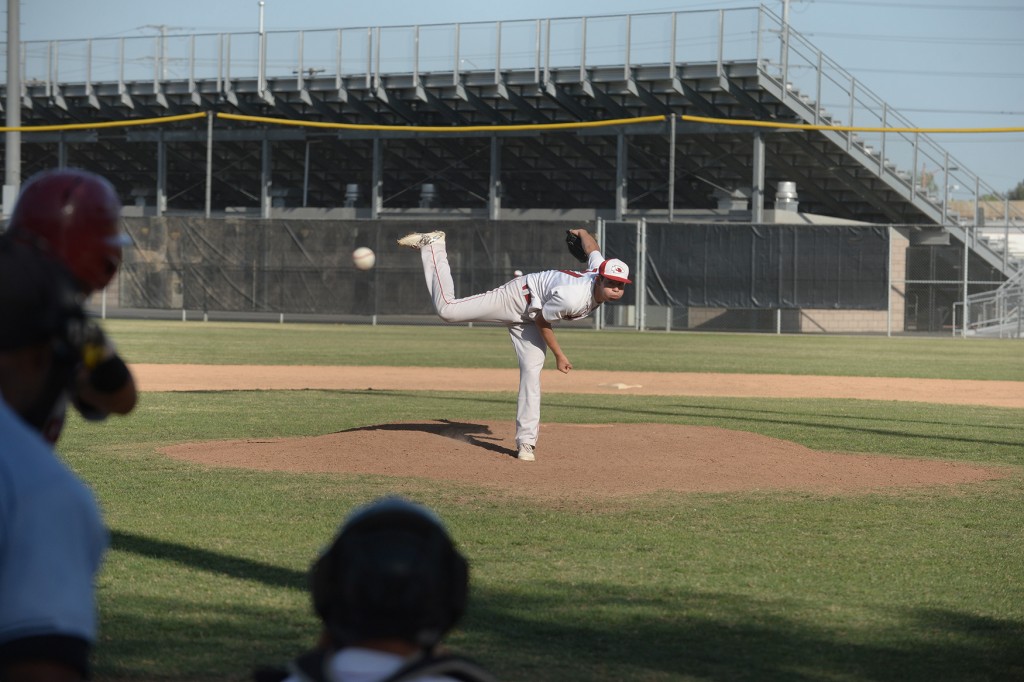 “I have been thrilled how the players have responded this year. It is important to keep their attention focused to each game since the prize is the same,” Burroughs coach Craig Sherwood said. “Our entire focus right now is in our upcoming game with Pasadena who defeated us this year. We hope having them in our yard will make a difference.”

After Pasadena, the Indians will battle the Bulldogs at 6 p.m. Friday night at the Dog Pound. Burbank (9-7, 4-2) is one game behind as they nip at the heels of their rivals. 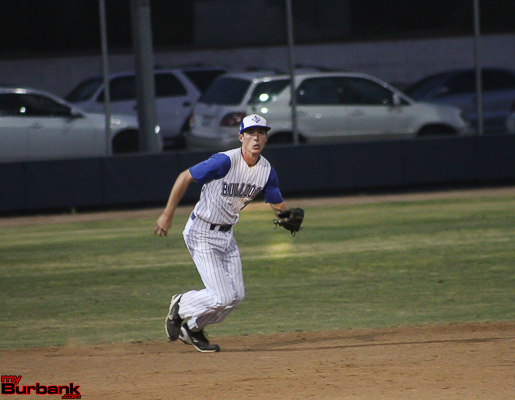 UC Davis bound Cameron Briggs is having a solid season for Burbank (Photo by Ross A. Benson)

“It’s a nice theory that it’s just another game. And to portray it to the players as such because yes they do all in fact matter,” Burbank coach Bob Hart said. “However reality indicates otherwise. Too much history, too many participants. When that many people show up the players know it’s different. A lot of cases you’re playing against kids you played against or with since you first picked up a glove. From a coaching standpoint it’s just another game but to the players and the community it’s the big game.”

The best part for all of us baseball fanatics is that there is another seven games after next week. There is a long way to go before a champion is crowned. But wouldn’t it be special if a league title is decided on May 14 as it was two years ago?

“It’s going to be a battle to the end,” said Hart, who won the league championship in 2013 with Sherwood at his side as his assistant. “I have a feeling a lot of things won’t be in place until the last week of the season and possibly the last day of it.”

Just when you thought the baseball showdown couldn’t be surpassed in hype, you’re dead wrong. Softball will be the “big game” for next week.

The clash between the two softball squads is shaping up to be a dandy as well. Both teams are a perfect 6-0 in league and feature the two best pitchers in league. Burbank’s Caitlyn Brooks and Burroughs’ Presley Miraglia have each tossed a no-hitter this season.

This could very well be the passing of the torch in the coming weeks as Brooks, a senior committed to Notre Dame, and Miraglia, a talented freshman, meet on the diamond for the very first time. 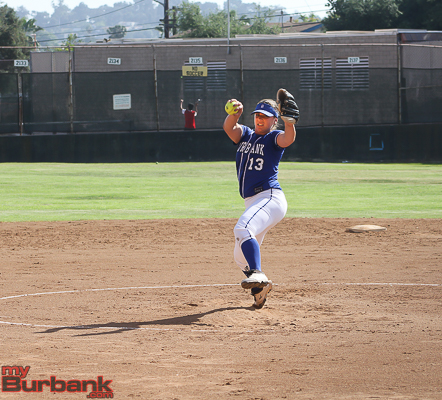 Caitlyn Brooks is having an All-American season in the circle and at the plate (Photo by Ross A. Benson)

“I think the season so far has gone to plan as far as our approach to games and practices,” Delaney said. “The league in general has gotten stronger. We have been working really hard at improving each and every day in all aspects of the game.”

Burroughs (14-2) is seeking to reclaim its perch atop the league having won three league titles in a row before Burbank (13-3) claimed the past two championships. The two teams share a two game lead in the Pacific League with Arcadia and Crescenta Valley looking up at 4-2.

“I couldn’t be more excited about where our team is right now,” Nicol said. “To be 14-2 with a very tough and challenging schedule is a credit to the work our girls and my coaching staff have put in since August.” 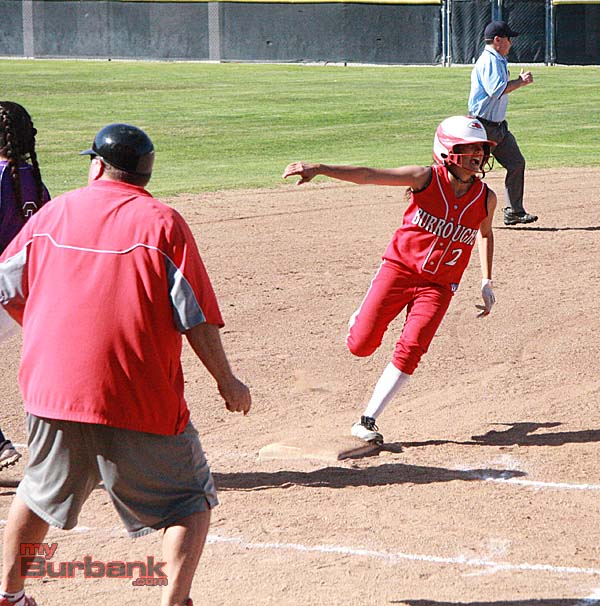 The rivalry game is set for Thursday evening at 6 p.m. at McCambridge Park. The Burbank seniors will be recognized before the game and then the fun and intense competition will begin.

“The Burbank-Burroughs games are always intense. Both teams have excellent athletes. Both teams are used to success and it is a great atmosphere,” said Delaney. “The game on Thursday is an important test for us but it doesn’t define our season. We need to continually play at a high level to achieve the goals we have set for ourselves and the game on Thursday will help us continue to do so.”

“I am excited, but not the least surprised, that both us and Burbank have been so successful so far,” added Nicol. “It is a credit to their girls and their coaching staff that they have been so successful this season, and we are really looking forward to playing them on Thursday. To have both teams playing so well only adds to the excitement and intrigue leading up to the game. It should be fun.”

And to add to the drama….there are points available for all four teams to seize as part of the race for the “myBurbank CUP.”

Coach Mike Delaney speaks with his team (Photo by Ross A. Benson)