Without the services of senior small forward Lawrence White and senior power forward Jorge Flores-Pere, its two top scorers and rebounders, Burroughs High was in a real pickle in its game against Crescenta Valley on Friday night. 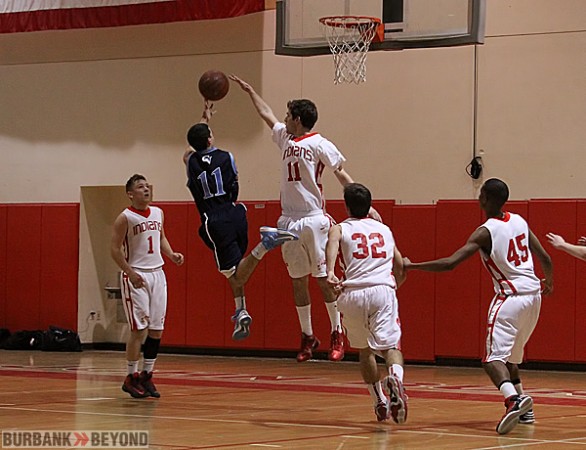 Austyn Dries attempts to block the shot of a CV player (Photo by Ross A. Benson)

This was proven as the visiting Falcons connected on 11 three-pointers, outscoring the Indians in three of four quarters, and easing into a 66-33 Pacific League victory at Burroughs.

White, who averages 18.6 points along with 9.5 rebounds, injured his right ankle in a recent 65-35 setback to Pasadena on Wednesday.

White tried to run and cut on the ankle before the tipoff, but wasn’t able to do so with his usual explosiveness.

“I think I’ll be out only one game,” said White before the contest. “But I have confidence in my guys.”

Flores-Pere, who scores 10.9 points and pulls down seven boards per game, has pneumonia and it’s uncertain when he will return to the team. 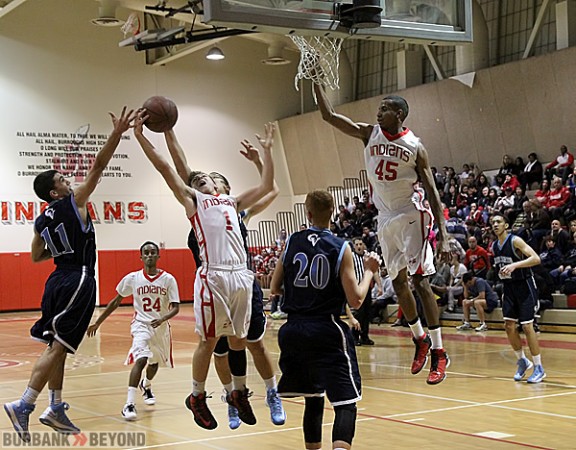 Kalen Verhoeven, #1, and Kyle Roberts, #45, battle CV for the rebound (Photo by Ross A. Benson)

Crescenta Valley (13-4, 4-0) knocked down five of 20 shots from the field in the opening quarter as Springer tallied seven points, including the first of four three-pointers, while senior forward Ryan Schloessmann scored all of his five points in the stanza.

“We knew Burroughs would come out with a lot of energy,” Crescenta Valley Coach Shawn Zargarian said. “That they [White and Flores-Pere] weren’t in the lineup makes a lot of difference. But we played hard and focused.”

Springer made two three-pointers in the second quarter and tallied eight points, while Pezeshkian dropped a trey that made it 30-11 with 2:55 left in the first half.

Burroughs played better in the third quarter, which was contested on even terms, but the fourth quarter saw Crescenta Valley outscore the Tribe, 15-6.

Crescenta Valley made five of 10 shots in the third quarter, with three coming from long distance.

Cole Currie had nine points, five assists and four rebounds for the Falcons.

Burroughs converted six of 10 from the field in the same quarter as Jared Soliman had 10 points including two from beyond the arc.

Soliman came off the bench and made four from downtown and led the Indians in scoring with 16 points. 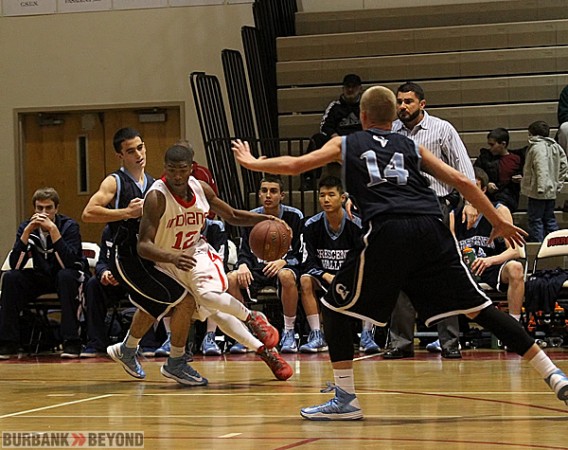 Oharjee Brown of JBHS dribbles against CV pressure (Photo by Ross A. Benson)

“I’m proud of how Jared played,” said Hochberg of his junior guard. “He doesn’t play a lot, but he had his best game.”

The next high scorer for JBHS was sophomore guard Chris Hovasapian who put in all of his five points in the first quarter, while senior center Kyle Roberts and senior guard Kalen Verhoeven each finished with four points.

Burroughs entertains Muir on Monday at JBHS at 5 p.m.