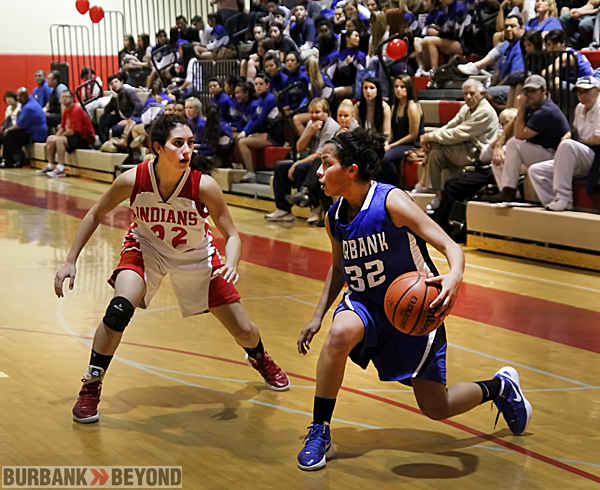 Sylvia Granados of Burbank High makes a move during a resent game against Burroughs High Girls. (Photo by Ross A. Benson)

Head Coach Bruce Breeden has sounded like a coach use to this kind of season, even if his team’s place near the top of the Pacific League standings is somewhat unusual.

Burbank is coming off a remarkable season in which it broke new ground. The Bulldogs won 16 games, its best showing in Breeden’s seven seasons and finished second in the Pacific League with a mark of 10-4. Muir won the league with a 14-0 season.

Now the Bulldogs will host Fountain Valley for the opening round of the CIF Southern Section Division IA playoffs.  One has to like their chances with Fountain Valley just 13-12 on the season and 4-7 in the Sunset League. It was just one of two fourth place teams from six team leagues selected for the postseason bracket.

Still, the Barons come from a tough league that features Hunnington Beach, Edison and Los Alamitos so nothing is a given. The Barons snapped a four-game losing streak by routing Newport Harbor on February 9, 56-28.

A Bulldogs’ win would most likely give them the daunting task of playing Centennial Corona in the next round, who plays at-large entry Upland on February 17. Centennial Corona is 21-6 overall and ranked as the No. 4 overall seed in the 32-team Division IA bracket.